Construction of the Churriana de la Vega roundabout is complete

Construction of a roundabout at Cristobal Colon avenue, Churriana de la Vega, costing 88,000 euros, was completed in the time frame. 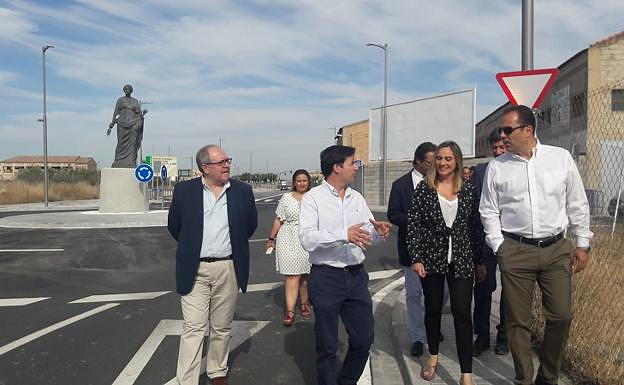 Construction of a roundabout at Cristobal Colon avenue, Churriana de la Vega, costing 88,000 euros, was completed in the time frame. The project will now be open to traffic. This act has been witnessed by Marifran Carazo, the Minister of Development, Infrastructure and Territory Planning, who was present in the municipality in March to present the project. The minister's promise to finish the work in the two-and-a-half months given was fulfilled as the works started in May.

These works are being done through the Public Works Agency (Junta de Andalucia) as part of an agreement between Ministry and Churriana City Council. This agreement was made to minimize the impact that the Metropolitan of Andalusia's works had on the municipal road. Grenade. Construction and commissioning of the roundabout are now complete after ten years. This was due to the collaboration agreement between the Andalusian government and this municipality in 2010. It was signed in 2010 in order to minimize the negative effects of Metro work in Granada. The agreement allowed for alternative traffic routes during construction of the section connecting the Technological Park of Health with Armilla.

Parque Tecnologico de la Salud Armilla, the Granada metro section, was completed in 2011. Traffic had to be diverted. This caused damage to Cristobal Colon avenue which was already suffering from excessive traffic. Cristobal Colon Avenue serves as the northern bypass of Churriana. It focuses traffic from the Granada capital bypass, to the towns Cullar Vega or Las Gabias. This helps to improve road safety and fluidity on this axis.

Roundabouts will be two-lane and have a central island of eight meters diameter. This includes a 2.55-meter wide gorget that can be used to turn heavy vehicles. The gazebo's outer diameter exceeds 27 metres.

The scope of work also included the replacement and installation of drinking water, electricity, and lighting pipes, roundabout's drainage network and paving with continuous bituminous mix of the action area. It also involved the creation of pedestrian crossings. The City Council coordinated the installation of eight lampposts, vertical and horizontal signage, and connected and legalized the facilities.

Directly, Churriana de la Vega's 14,851 residents are the beneficiaries. Indirectly, there are 28,081 people that make up Las Gabias (20.703) and Cullar Vega (7.378 inhabitants). Those who move by car usually choose Cristobal Colon avenue in order to reach Armilla or the Granada ringroad.

‹ ›
Keywords:
FinalizanObrasConstruccionGlorietaChurrianaVega
Your comment has been forwarded to the administrator for approval.×
Warning! Will constitute a criminal offense, illegal, threatening, offensive, insulting and swearing, derogatory, defamatory, vulgar, pornographic, indecent, personality rights, damaging or similar nature in the nature of all kinds of financial content, legal, criminal and administrative responsibility for the content of the sender member / members are belong.
Related News