The State Security Court is a special jurisdiction whose decisions cannot be appealed. 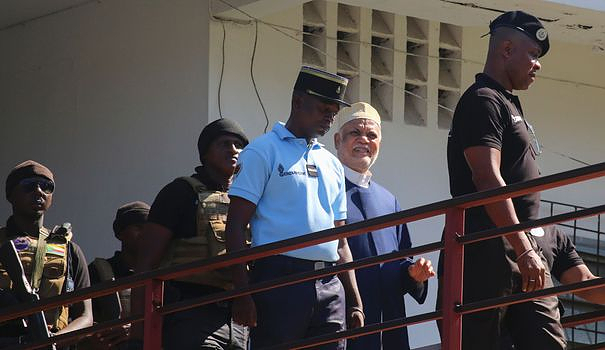 The State Security Court is a special jurisdiction whose decisions cannot be appealed.

Mr. Sambi "is sentenced to life imprisonment and civic degradation of all political and civil rights", i.e. his right to vote and eligibility, and "the Court orders the confiscation of his property and assets for the benefit of the public treasury", read its president Omar Ben Ali at the hearing.

Mr. Sambi, white beard and blue boubou, appeared briefly last week on the first day of the trial, visibly weakened after four years of preventive detention while the legal duration is set at eight months.

"The composition of the court is illegal, I do not want to be judged by this court", he had declared, before refusing to appear at the trial throughout the rest of the proceedings.

"He betrayed the mission entrusted to him by the Comorians," prosecutor Ali Mohamed Djounaid hammered on Thursday in a solemn tone, demanding life imprisonment during the requisitions.

Mr. Sambi is accused of being involved in the “economic citizenship” scandal. The former president (2006-2011) had passed a law in 2008 allowing passports to be sold at a high price to those seeking a nationality.

A means of replenishing the coffers of the State by offering an administrative land of welcome, in particular to the tens of thousands of "bidouns", Bedouins from the Gulf countries considered as second-class citizens in their homeland and deprived of identify.

Mr. Sambi was accused of having embezzled a fortune within the framework of this program. The damage for the government amounts to more than 1.8 billion euros, according to the prosecutor, more than the GDP of the small poor archipelago in the Indian Ocean.

“They gave thugs the right to sell Comorian nationality like we would sell peanuts,” castigated a lawyer for the civil party, Me Éric Emmanuel Sossa.

But according to the French defense lawyer at AFP, Me Jean-Gilles Halimi, "no trace of this money has been demonstrated, no account discovered".

Mr. Sambi was originally prosecuted for corruption. In September, the facts had been reclassified as high treason, a crime which "does not exist in Comorian law", insisted Me Halimi.

The Court will have to "make a legal construction of this concept", specified the order for reference. The defense denounced the illegality of this jurisdiction, arguing that its president had already sat in the indictment chamber.

"It is clear that Sambi interferes with the political agenda of Azali Assoumani and that he is doing everything to get rid of it," accused his daughter Tisslame Sambi to AFP last week, after the requisitions.

A popular Islamist with a white beard and most of the time dressed in traditional attire close to that of Iranian clerics and which earned him the nickname "ayatollah", Ahmed Abdallah Sambi studied in Saudi Arabia, Sudan and then in a theological school in Iran.