Of the more than 70 missiles launched by Moscow, "most" were shot down, assured Ukrainian President Volondymyr Zelensky. 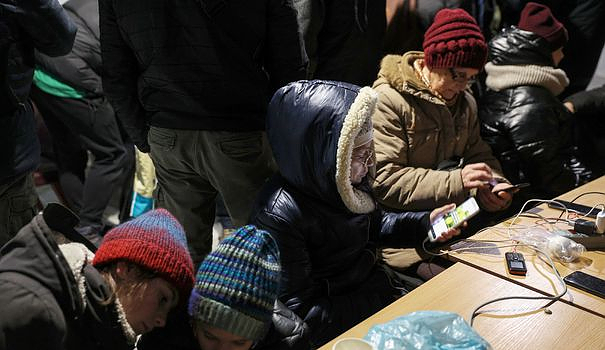 Of the more than 70 missiles launched by Moscow, "most" were shot down, assured Ukrainian President Volondymyr Zelensky.

But the new salvo was deliberate "to make Ukrainians suffer as much as possible", while an icy cold hits the country, said the boss of Ukrenergo, the Ukrainian electricity operator.

“A peak of cold” is expected on Tuesday and Wednesday, Volodymyr Kydrytskiï warned on television. "The timing that the Russians have chosen for this attack is linked to their desire to inflict (...) maximum damage to our energy system," he said.

The boss of Ukrenergo assured that he had "no doubt that the Russian army consulted the Russian energy engineers during this attack, judging by the geography of the strikes".

Nearly half of energy facilities have been damaged after months of systematic attacks, plunging Ukrainians into darkness and cold.

Emergency repairs are underway, the power operator said, but power cuts will have to be enforced across Ukraine.

"Because of the consequences of the bombings (...), to maintain the balance between the production and the consumption of electricity, a system of emergency cuts will be set up in all the regions of Ukraine. electricity will be supplied as a priority to essential infrastructure", underlined Ukrenergo on Telegram.

Nevertheless, "some power plants will not be able to operate at full capacity for a while", according to the operator. "Combined with frosts that will intensify over the next 24 hours, this will lead to a power deficit in the system."

“The situation is difficult, but under control,” Ukrenergo added, as kyiv forces announced that they had destroyed more than 60 of the approximately 70 missiles launched by the Russians.

The Russian army acknowledged "a massive strike carried out with high-precision weapons" on Monday around 12:00 GMT which targeted Ukrainian military sites and energy infrastructure linked to Ukrainian forces.

The new Russian strikes on Ukraine came on the day of the entry into force of the mechanism for capping the sale price of Russian oil decided by the West, who are thus trying to dry up Moscow's windfall to finance its military effort.

Monday morning, the Kremlin warned that this new sanction would have "no impact" on its offensive.

In this tense context, Russian President Vladimir Putin appeared on television on Monday driving a car crossing the Crimean Bridge, a key infrastructure that connects Russia to this Ukrainian peninsula annexed in 2014 by Moscow. An explosion, attributed by the Kremlin to Ukraine, had damaged it in October.

Since the fall, and a series of humiliating setbacks, the Russian army has stepped up strikes against Ukrainian energy installations, so much so that most of the civilian population has electricity for only a few hours a day.

The latest salvo of Russian missiles has caused further water and electricity cuts in several cities and regions, as winter temperatures are well established

According to the deputy head of the Ukrainian presidential administration Kyrylo Tymoshenko, an initial report shows at least two dead and three wounded, including a child.

Visiting kyiv, the UN High Commissioner for Human Rights, Volker Türk, wrote on Twitter, photo in support, to have had to join a bomb shelter and continue a meeting there.

In Borodianka, northwest of kyiv covered with snow and ice, large tents equipped with wood stoves have been installed to allow the population to warm up or cook.

"The electricity is cut for four hours, sometimes six hours", testifies one of its inhabitants, Serguiï, before tearing the pages of a book to make a firelighter.

Next to it, a bearded man chops wood with a hatchet, while a woman rolls dough to make stuffed buns. The fire hums, a samovar is placed on the stove to heat the water.

"The plan is simple: we have wood and we sit down here," resumes Serguiï. But he fears even longer cuts which would be "very hard, especially for children".

The fighting also continues to rage on the long front line. The Ukrainian army thus announced on Monday that it had repelled several attacks during the previous 24 hours, in particular in the Bakhmout sector, in the east.

In Moscow, at the end of the day, the Ministry of Defense reported attacks against two air bases in central Russia. Kyiv did not confirm.

“The kyiv regime (…) attempted to carry out strikes with Soviet-designed drones on the Diaguilevo air base in the Ryazan region and the Engels air base in the Saratov region,” the text reads.

The ministry accuses the Ukrainian forces of seeking "to disable long-range Russian planes", used for strikes on energy infrastructure in Ukraine.

If these "jet drones" were intercepted by Russian anti-aircraft defense systems, their debris fell on the territory of the air bases attacked, causing explosions there, killing three soldiers, injuring four and "slightly" damaging two planes, according to the press release.