Less than two months before COP27 in Sharm el-Sheikh, Egypt, Antonio Guterres and Egyptian President Abdel Fattah al-Sissi -- from a distance -- brought together various leaders from developed and developing countries behind closed doors to " frank exchanges" on climate action. 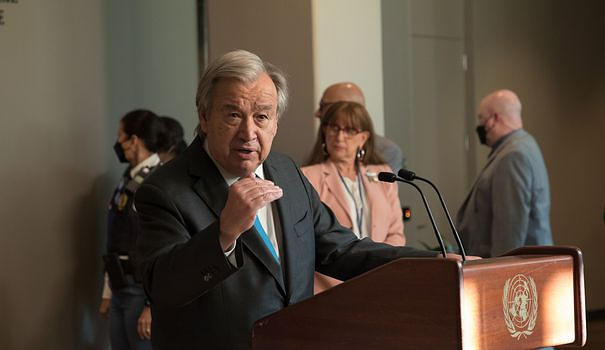 Less than two months before COP27 in Sharm el-Sheikh, Egypt, Antonio Guterres and Egyptian President Abdel Fattah al-Sissi -- from a distance -- brought together various leaders from developed and developing countries behind closed doors to " frank exchanges" on climate action.

"My messages have been clear. On the climate emergency: the 1.5°C target is on life support. And waning fast," the UN secretary-general said in reference to the most ambitious goal of the Paris agreement to limit global warming to 1.5°C compared to the pre-industrial era.

Under these conditions, he called on governments to tackle between now and COP27 "four burning problems": raising ambitions in terms of reducing emissions, helping the most vulnerable countries, adapting to the impacts and its funding which must be increased, and finally "loss and damage".

This last point, which has become a crucial element of climate negotiations, concerns the damage already caused by the multiplication of extreme weather events, which neither measures to curb global warming nor those to adapt to its consequences have been able to prevent. And for which developing countries are demanding compensation.

"It is high time to have a serious discussion and meaningful actions on this issue," insisted Antonio Guterres.

"I hope COP27 in Egypt will get on with it," he added, seeing it as a matter of "climate justice, international solidarity and building trust."

At COP26 in Glasgow at the end of 2021, despite pressure from developing countries advocating for specific funding for such loss and damage, rich countries had blocked this request and the meeting had simply given birth to the launch of a "dialogue" until in 2024.

A few days ago, the group of least developed countries meeting in Dakar put this claim back on the table, calling for the establishment of a "financing mechanism" to deal with the damage caused by global warming.