Ciudadanos and PP are not convinced by the agreement regarding the use of the treasury leftovers.

The current government team has criticised the agreement between the Federation of Municipalities and Provinces and the Ministry of Finance regarding the use of the remaining treasury funds for 2019. 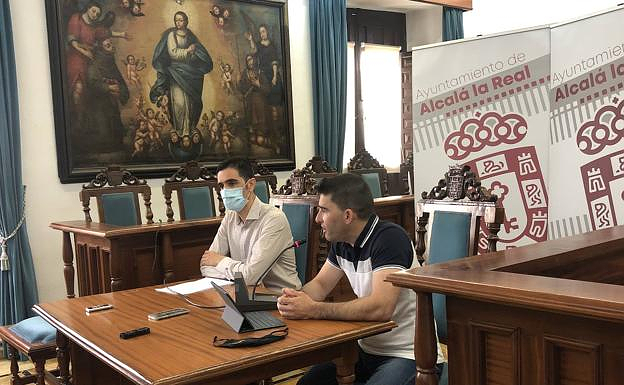 The current government team has criticised the agreement between the Federation of Municipalities and Provinces and the Ministry of Finance regarding the use of the remaining treasury funds for 2019. Marino Aguilera, the mayor, and Angel Montoro the deputy mayor, addressed the media to describe what they call "an armed burglary." They described the agreement as "precarious" and "not with the unanimity or consensus of other decisions." On Monday, they announced it and highlighted how "it supposes that the practical seizure the treasury leftovers of the year 2019, of local entities." Marino Aguilera explained how the settlement of the budget for the previous year revealed that the town had a block remainder of 1,775,629 euro. The person responsible for the consistory said that "generally, towards March, the Government used send a decree which liberalized this money, and allowed it be spent on financially viable investments." This year, it hasn't happened as we were in a state alarm. It is unlikely that it will happen again.

The Government allows only 20% of the money to be spent on social spending. We have also allocated 134,000 euros to social spending. Aguilera stated that we still have 1,641,629 euros remaining. This decree states that you must give all of the money to be able to dispose of it. However, if we refuse to give it to you, it is not our right to touch it. We will then be able join an aid fund worth 5,000 million euro, which is only available to municipalities that have delivered their surplus. We would receive the equivalent of 35%, which is approximately half a billion euros. They would give us 220,000 this fiscal year and the remainder next fiscal year. But we can't spend it on anything, he said. The mayor explained. The deadline for the Government to return the decision is September 15, and it must be taken before that date.

Angel Montoro said that this situation would lead to "many consistories to economic catastrophe" and create second- and first-class citizens. There will be municipalities that can help their neighbor and others who cannot. He also mentioned that his party had recently taken a complete motion in this direction and from the opposition, he was called alarmist. "It is now when we have completely proven us wrong."

The consistory has three options. It would be possible to follow the agreement and with the money designated, to carry out the projects they can within the limits of the agreement. You could also allocate the 1,600,000.000 for the amortization or keep it indefinitely. Aguilera stated that the technical body of the city council has already begun to examine which option is most beneficial to the consistory. Once we have an answer, we will make it public.

The mayor of the municipality stated that this would mean that no "investments or projects necessary for the municipality can be carried out". He also wondered if it will happen next year, with the remaining 2020.

‹ ›
Keywords:
AcuerdoRemanentesTesoreriaConvenceCiudadanos
Your comment has been forwarded to the administrator for approval.×
Warning! Will constitute a criminal offense, illegal, threatening, offensive, insulting and swearing, derogatory, defamatory, vulgar, pornographic, indecent, personality rights, damaging or similar nature in the nature of all kinds of financial content, legal, criminal and administrative responsibility for the content of the sender member / members are belong.
Related News