Churches and "Last Generation" - With God's blessing to the blockade

With illegal actions, climate activists of the "last generation" have triggered a political debate about tightening the right to demonstrate and harsher penalties. 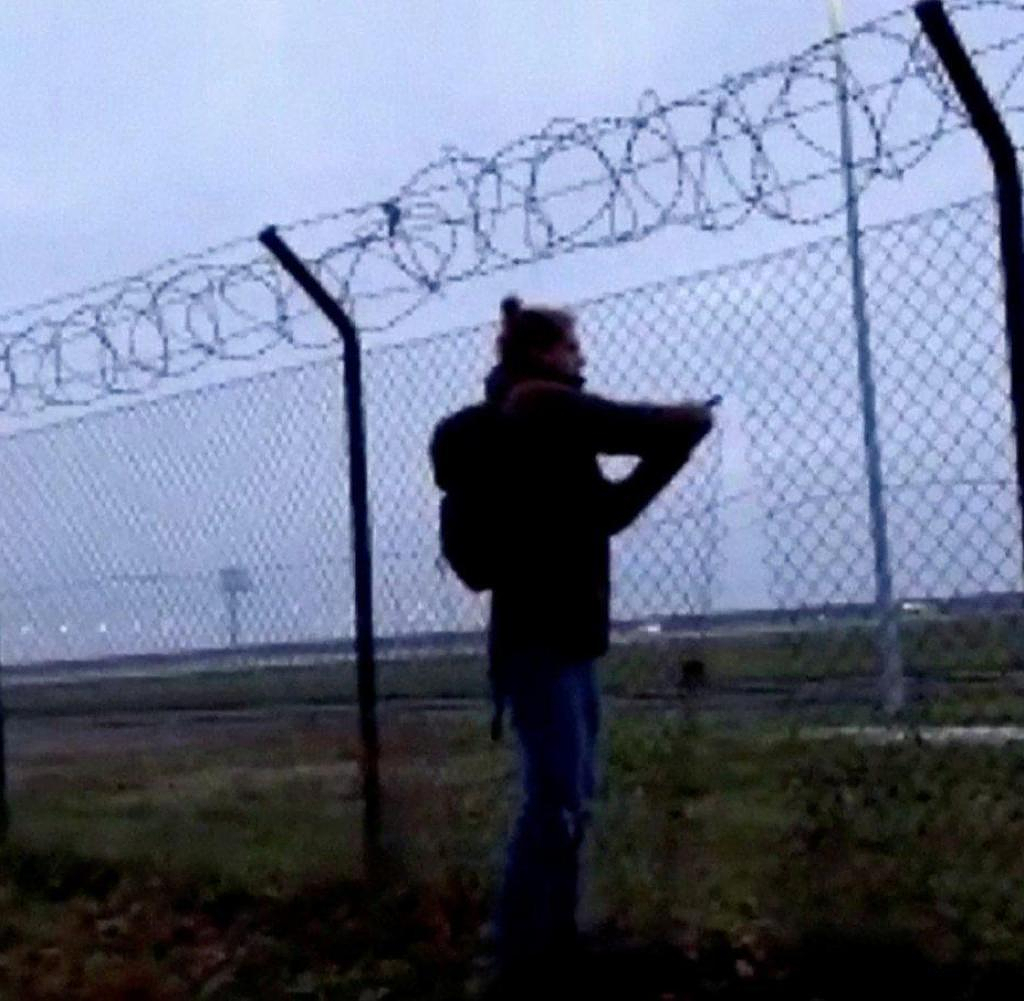 With illegal actions, climate activists of the "last generation" have triggered a political debate about tightening the right to demonstrate and harsher penalties. Dozens of “climate adhesives” were imprisoned nationwide because of road blockades and mashed potato attacks on works of art. Most recently, the intrusion of demonstrators onto the runway at Berlin Airport caused outrage. In addition to fierce criticism, there is also open sympathy for the illegal protests by the "climate glue" - especially in science and church circles.

A churchman is now even taking the initiative after the "last generation" suspended their actions for this week after a wave of arrests. Jesuit Father Jörg Alt from Nuremberg has announced his own demonstration for this Thursday - at the venue of the conference of interior ministers in Munich. Half a dozen professors and scientists are then supposed to hold "100 seconds before 12 o'clock" so-called "short lectures" on the topic "When the world is on fire". Jesuit Father Alt speaks of a "support demo" for the concerns of the climate activists. It's not his first street protest, nor is he the only supporter of the "Last Generation".

By standing up for the activists, church representatives of both denominations support actions in which violations of the law are not only accepted, but are actually part of the program. Always at the forefront: predominantly young supporters of the “Last Generation”, the new group that says it has been able to recruit “several hundred” activists since the beginning of the year and has been responsible for an escalation of interventions in the infrastructure for weeks.

Since October, 148 Catholic theologians and scientists working in Germany, including around four dozen professors and institute directors, have signed an appeal to support the civil disobedience of climate activists. A total of 956 representatives of the Catholic Church have already joined the petition. The justification states that the "concerns" of the activists are shared and that "in view of the drama of the situation" they call for "support of the actions in solidarity". After all, civil disobedience, for example in the case of church asylum, is “an integral part of Christian practice”.

The Evangelical Church in Germany (EKD) recently invited members of the “last generation” to its synod. The 23-year-old climate activist Aimée van Baalen was greeted with standing applause by parts of the church parliament for her statement that Jesus was also a resister. Anna-Nicole Heinrich, President of the EKD, criticized the "disproportionate" way in which the demonstrators were treated and persecuted. In their eyes, blockades are “justified non-violent civil disobedience”. The evangelical Advent collection is also influenced by the climate.

Jesuit Alt is one of its sponsors from the very beginning and is also a co-initiator of the theologian appeal. The 61-year-old, who has a doctorate in migration sociology, became aware of the movement during a climate hunger strike in front of the Reichstag in September 2021, which formed at the time as the "revolt of the last generation" and advocated radical immediate measures against global warming.

Alt recognized the publicity potential of the young people camping out in front of Parliament during the election summer and decided to help with his experience and contacts. At the time, the Greifswald student Henning Jeschke was the most persistent demonstrator: When everyone else had given up after three weeks of hunger strike, he announced that he would not eat or drink in order to force a direct discussion with the chancellor candidates on climate change.

Jeschke, now 22, was taken to the intensive care unit and narrowly escaped permanent damage. He had achieved what he wanted: a dialogue with Olaf Scholz, after which the newly elected Chancellor reportedly complained that he had hardly had a chance to speak. Alt says he admires the activist's "strong will" and "selfless motivations" and has been close friends with Jeschke ever since. The hunger strike is still a means of resistance of the "last generation". An activist imprisoned in Munich in recent weeks was so weakened that he was taken to the clinic - for observers an indication that at least some in the movement seem ready to go to extremes

The fact that the Catholic Alt became an activist himself and employs the judiciary with containers, i.e. stealing expired food from supermarket garbage cans, as well as so-called street glue, he justifies with the impending danger of global warming. "Fridays for Future," he told WELT, "has brought a new radicalism to my thinking." Alt refers to UN Secretary General António Guterres, who chose drastic words at the climate summit in early November: "We are on the highway to climate hell with our foot on the accelerator."

In research, too, the discussion about the legitimacy of resistance to the system is gaining momentum. The type of activist scientist seems more socially acceptable than ever. Its maxim is that in the event of an existential threat, the end justifies the means - especially when it comes to saving the planet. Political economist and professor Maja Göpel is an example of this new self-image and is doing well in the role of “sustainability expert” as a TV talk show guest, bestselling author and speaker. In 2019, Göpel co-founded the climate alliance "Scientists for Future". For actions of the "last generation" she at least expressed understanding that it was important to "fly the flag".

The organization "Scientist Rebellion", an association of around 1000 researchers from 30 countries, goes much further. Two weeks ago, nine members of the German group occupied the Porsche pavilion in VW's Autostadt in Wolfsburg and stuck themselves between the cars on the floor for 40 hours. Their demand: the general speed limit of 100 km/h on German autobahns. One of the actors: Dr. Gianluca Grimalda, "Experimental Economist" at the Kiel Institute for the World Economy. Regarding the balancing act between independent research and his attitude, he says: “My research feeds into my activism. The methodology I use to research guarantees that the results I get are objective, they are not influenced by my values. So I can be both a scientist and an activist.”

His employer sees it differently. A spokesman for the institute told WELT: “The IfW Kiel is politically neutral. We expect our employees to comply with the rules of the democratic constitutional state, even when it comes to private social commitments.” "We generally do not provide any information on labor law issues that affect individual employees."

Grimalda confirmed to WELT that he was admonished during a one-hour "exchange" with the institute's management. It was repeatedly made clear to him that the IfW did not tolerate any participation in activism that included illegal actions. He was also made aware of the incompatibility of a government-paid employee protesting against the government. The scientist was not impressed by this. Shortly thereafter, he tweeted a video of himself taking part in an airport blockade in Milan where activists were calling for a ban on private jets. The Institute has not responded to this so far.

Jesuit Father Alt sees parallels in the recent protests by researchers with the emergence of the "last generation". Scientists also went on hunger strike, as was the case recently when the Autostadt was occupied: "Scientists simply no longer see why and what for they work when one alarming report after another is boredly acknowledged by politicians, the media and society and then filed away social psychologist Frank Eckerle from the Philipps University of Marburg also attests to a “loss of trust in politics” for many scientists on climate issues.

The Leipzig sociologist and extremism expert Johannes Kiess is hardly surprised by the academics' closeness to the protest movement: "The topic comes from science. It is therefore not surprising that researchers, at least on climate issues, understand the protests well.” However, the support is not higher than in the general population: According to the “Leipzig Authoritarianism Study 2022” published this month, only 14.6 percent of those living in Germany are People feel that the effects of climate change are being overstated. Kies is convinced of the protests: "The issue of climate change is here to stay."

‹ ›
Keywords:
InvestigationKlimawandelInnenpolitikAufstand Der Letzten Generation (Aktivisten)KirchenTexttospeechJörg AltMünchenIfW KielVolkswagenJesuitenpaterMusik
Your comment has been forwarded to the administrator for approval.×
Warning! Will constitute a criminal offense, illegal, threatening, offensive, insulting and swearing, derogatory, defamatory, vulgar, pornographic, indecent, personality rights, damaging or similar nature in the nature of all kinds of financial content, legal, criminal and administrative responsibility for the content of the sender member / members are belong.
Related News