- Group D: OM pick up the gifts -</p>Against Sporting, winner of their first two matches, OM finally took a breather by signing their second victory in the last 18 C1 matches they played (16 losses). 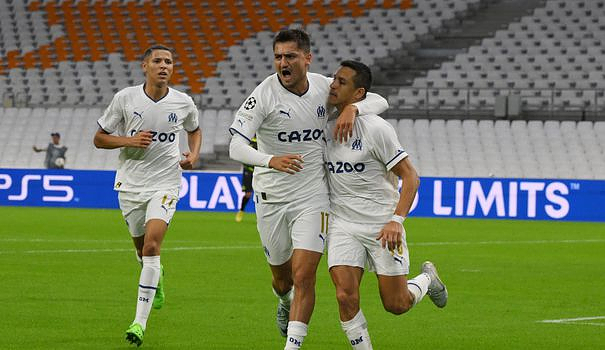 Against Sporting, winner of their first two matches, OM finally took a breather by signing their second victory in the last 18 C1 matches they played (16 losses).

In the standings, the draw between Frankfurt and Tottenham (0-0) allows Marseille, still 4th, to approach one point from second qualifying place for the round of 16.

But that was far from over at the start of the evening, in a Vélodrome stadium behind closed doors due to overflows during Frankfurt-OM, and after the opening of the express score from Trincao, left alone by Jordan Veretout after 51 seconds. game...

But the nudges of veteran Spanish Antonio Adan, goalkeeper who was at fault on three occasions, revived OM.

The Sporting goalkeeper first completely missed two clearances, sanctioned by Alexis Sanchez (13th) and Amine Harit (16th). Then he received a red card for an incomprehensible hand outside his area (23rd). And his lining Franco Israel did no better, missing his exit on a corner, offering a goal to Leonardo Balerdi (28th), before giving in to Chancel Mbemba (85th).

Three wins in three matches, nine goals scored, zero conceded... How can you imagine that Bayern Munich is playing in the famous "group of death" of the Champions League?

A few days before the "Klassiker" against Dortmund, the Bavarians crushed Plzen 5-0 despite the absence of several executives (Lucas Hernandez, Joshua Kimmich, Kingsley Coman, Thomas Müller).

But the shock of group C took place in Milan, and it turned to the advantage of the players at home (1-0), thanks to a millimeter strike from Hakan Calhanoglu (45th 2).

The Italians were then able to make Robert Lewandowski transparent, and also had success, seeing a Catalan goal canceled by video assistance due to a very light hand from Ansu Fati.

The return match at Camp Nou on October 12 will be very expensive for Xavi and his players (3 pts): another defeat against the Lombards (6 pts) would almost eliminate them from the competition.

- Group A: Napoli maintain the gap with the Reds -

Spectacular at the start of the season, and already the best attack in the Champions League (13 goals), Napoli scored a third victory in three matches, on the lawn of Ajax Amsterdam (6-1).

The Italians, quickly led but reactive to reverse the trend in the first period, offered an attacking festival and maintained the three-point lead they counted on Liverpool, contender for the title winner of Rangers.

Anfield, the home of the Reds, was released in the 7th minute by a superb direct free kick from right-back Trent Alexander-Arnold, before a penalty from Mohamed Salah (53rd). But it will take more to restore confidence in the partners of the Egyptian, only 9th in the Premier League.

- Group B: Brugge bring down Atlético -

Who will stop Club Brugge? After three days, the Belgians are very close to a qualification as easy as it is unexpected for the round of 16 of the C1!

Three times winners without conceding a single goal, this time they managed to surprise Atlético Madrid, picked 2-0 thanks to Kamal Sowah and Ferran Jutglà. Never has a Belgian team made such a start to the season in the Champions League.

And here are the Brugeois well ahead, six points ahead of their three rivals, including Bayer Leverkusen, beaten in Porto (2-0) in a match with a crazy scenario, with two goals canceled, a penalty missed by the Germans and a red card , also for Bayer.

On the other hand, concern lurks in Madrid: Diego Simeone's men have just lost twice in a row in C1 … And Antoine Griezmann was unhappy, with a missed penalty and a goal disallowed by video assistance.