Brazil: purchasing power, decisive for voters in a favela in Rio

Marciano Lopes Vieira, a 43-year-old moto-taxi, makes ends meet by weaving his two-wheeler between the steep and narrow alleys of the favela. 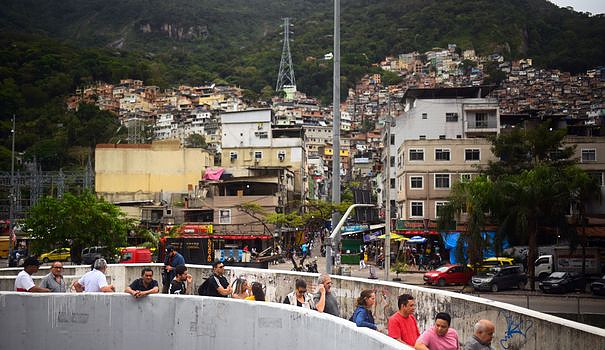 Marciano Lopes Vieira, a 43-year-old moto-taxi, makes ends meet by weaving his two-wheeler between the steep and narrow alleys of the favela.

He will vote for the left-wing ex-president Luiz Inacio Lula da Silva (2003-2010), citing the increase in the price of gasoline during the mandate of the far-right incumbent president, Jair Bolsonaro.

"It was very difficult. I had to benefit from a social program for the first time, but it only covers the rent," he told AFP in the queue to vote, at the foot of the hill of the gigantic favela.

Rocinha, which can be seen from the beach below, spreads over a mountainside in the south of Rio de Janeiro, not far from the upscale neighborhoods of Sao Conrado and Gavea, and has around 100,000 inhabitants.

Early in the morning, dozens of people descended from the favela patiently awaited the opening of the polls at 8:00 a.m. (11:00 GMT), trampling thousands of leaflets abandoned on the ground after midnight Saturday, the last deadline for distributing electoral propaganda.

With the election under tension in a deeply fractured Brazil, few people carried signs identifying them as voters of Bolsonaro or Lula, big favorites in the polls this Sunday.

However, the atmosphere is good-natured and everyone votes calmly.

"I'm going to vote for Bolsonaro because he made (the social program) Auxilio Brasil," said Rio da Maria Rodriguez, 56, sitting in front of the school transformed into a polling station and clutching a cane.

"Thanks to these allowances, I manage to buy my medicines, but I only live thanks to the help of my children," says this voter who had to stop working because of knee pain.

It was Bolsonaro who launched the "Auxilio Brasil", the new version of the "Bolsa Familia" which was the flagship social program of the Lula years, the amount of which went from 400 reais (about 80 euros), to 600 reais this year.

"After the elections it will stop", predicts this manager of a restaurant, for whom "everything: health, education, employment" was better under Lula.

Weksley Watson de Souza, 35, is a school guard and will vote for Bolsonaro.

"I don't agree with his position on LGBT people, he's not perfect but it's the best option," said this black man who was queuing at 7:30 a.m. to vote.

In this country of 214 million inhabitants with monster inequalities, more than 33 million people suffer from hunger, a figure up 73% compared to 2020, according to a study published in June by the Brazilian Research Network on food security (Rede Penssan).

To increase purchasing power, Lula for his part undertakes to launch a new "Bolsa Familia": in addition to the 600 reais of the "Auxilio Brasil", families would receive 150 reais for each child under the age of six. .

These promises convinced Elezoda Belo Oliveira, 57, who earns a living by ironing.

"I only eat eggs! I no longer eat meat, even chicken feet are very expensive," exclaims Ms. Oliveira, one of the few people to wear a Lula sticker.

"Bolsonaro was the worst president of all time," said this sparkling-eyed woman.

The vote of Rafaela, 27, will go for this first round to Ciro Gomes, the center-left candidate credited with 5% of the voting intentions, according to the latest Datafolha poll.

This black woman worked in a restaurant but lost her job during the pandemic. Today, she is a hairdresser at home. In the event of a second round, she will vote for the left-wing ex-president Lula.

"Everything is way too expensive with Bolsonaro and he's not doing enough to help people," she argues.