Baza recognizes the talent, effort, and solidarity of its youth 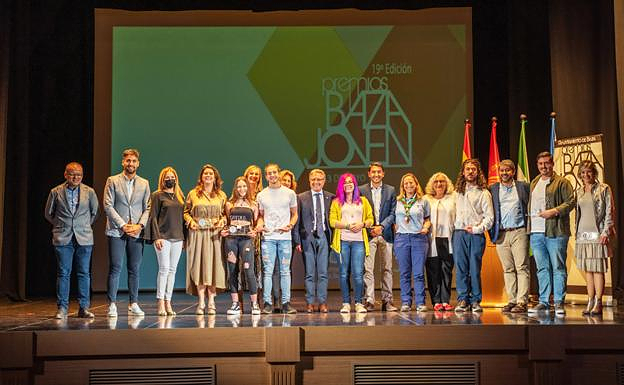 In its 19th edition, the Dengra Theater hosted Baza Joven Awards. Alejandro Ortega and Rebeca Sola, Antonio, Maria de la Cruz Donaire and David Quirante were among those who received the award. Scout Basti was recognized for being exemplary examples to all Bastetan youth>>

These awards are given to young Bastetans who have distinguished themselves in sports, business, art, creation, associations, and volunteering. The council acknowledges them and sets them up as an example for other youth groups as well as all citizens of Baza.

These 2022 winners in each category were: Ex aequo youth arts and creation modality: Maria de la Cruz, Antonio Donaire Pascual. Donaire Brothers (Creators and faithful recreations of the jewels from the Lady of Baza). Two brothers who dedicated their time and effort to creating jewels for the Lady of Baza. Today, we can see them in the recreations that occur throughout the year. They bring life to the Lady and the culture closer to the public. Rebeca Sola Martinez. Film Production Design. She worked in the Costume department on shows like Game of Thrones. She studied Audiovisual Communication. Her passion is rolling. She has spent the last few years exploring the world of Production Design. Here she shapes and colors the characters and spaces of various series.

The ex aequo sport modality has awarded the Baza Joven 2022 award to Javier Quirante Perez, European Powerlifting Champion, and David Quirante Perez, Spanish Powerlifting Champion. These two young Bastetan powerlifters started their journey in the sport of powerlifting over five years ago. They have won numerous national and international titles. Javier and David were the European podium winners last year, an award that is also recognized.

Grupo Scout Basti received the award for associationism/voluntourism. Their main goal is to encourage respect and tolerance through outdoor activities. The City Council provided the premises, so that the children can become responsible citizens. Activities in nature encourage respect for the environment and all values are taught. All of this is geared towards the goal of leaving the planet in better condition than we found it.

The gala concluded with an aerial fabric display by the Air Show company.

‹ ›
Keywords:
BazaPremiaTalentoEsfuerzoSolidaridadJovenes
Your comment has been forwarded to the administrator for approval.×
Warning! Will constitute a criminal offense, illegal, threatening, offensive, insulting and swearing, derogatory, defamatory, vulgar, pornographic, indecent, personality rights, damaging or similar nature in the nature of all kinds of financial content, legal, criminal and administrative responsibility for the content of the sender member / members are belong.
Related News