Athletics: European champion in the 100m, Jacobs is reborn in the fury of Munich

Yet not immediately on the pace at the start, Jacobs ended up reciting his score to win as boss in 9 sec 95, ahead of two Britons: defending champion Zharnel Hugues (9. 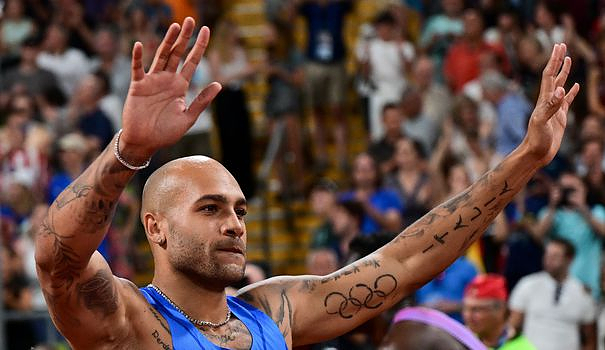 Yet not immediately on the pace at the start, Jacobs ended up reciting his score to win as boss in 9 sec 95, ahead of two Britons: defending champion Zharnel Hugues (9.99) and Jeremiah Azu (10.13). Frenchman Mouhamadou Fall took 5th place in 10 sec 17.

The 27-year-old Italian clocked his best time of the season at the right time, after an injury-spoiled start to the summer, when he still raced with numerous Italian-colored straps on his left leg.

His form remained a mystery as he left the World Championships in Eugene (USA) last month with a retirement before the semi-finals of the 100m, due to a "contracture in the adductor magnus of right thigh". Before that, he had already experienced intestinal problems in Nairobi in May, then a pulled left thigh, preventing him from completing a single very high level race before Munich.

"My season was difficult with many problems, injuries. My leg is not great. I'm not very happy with my race from a technical point of view. But I'm very happy with my gold medal, appreciated the Italian. After the Olympics, the Euro, I only have the Worlds left now. I can't wait to play the relay, we have great ambitions with the team".

The tattooed Italian, also Olympic champion in the 4x100m relay, thus confirms his hold on the straight line a year after being crowned Olympic champion to everyone's surprise in Tokyo. He was then titled in the 60m at the Indoor Worlds in March in Belgrade.

Only regret: not having seen him face the Americans led by Fred Kerley, the new world champion. Maybe for the last end-of-season meetings by September?

Mouhamadou Fall (30) took 5th place in his first individual international final. The three-time French 100m champion is under threat of suspension for three breaches in less than a year of his anti-doping location obligations. He is thus only engaged in individual in Bavaria (100 and 200 m).

Put in the mood by the men's 100m, the German public was then electrified by the unexpected victory of Gina Lückenkemper on the straight ahead of the favorites, the Swiss Mujinga Kambundji and the Briton Daryll Neita.

Lückenkemper completed Germany's triumphant evening, contributing to the superb atmosphere in the setting of the Olympic Park in the north of the Bavarian city.

Far from an atmosphere of gentle nocturnal confession, the Germans won four medals in the evening with Claudine Vita (3rd in the disc), Kristin Pudenz (2nd in the disc), Lückenkemper and Niklas Kaul's gold in the decathlon at the coming from a 1500 m of fire (4:10.04), where he was pushed by a delirious crowd.