Where are the reception capacities of the hospital, at a time when the Covid-19 is once again circulating at a high level in France? This Wednesday, the State published the count of the various beds in French establishments for the year 2021. 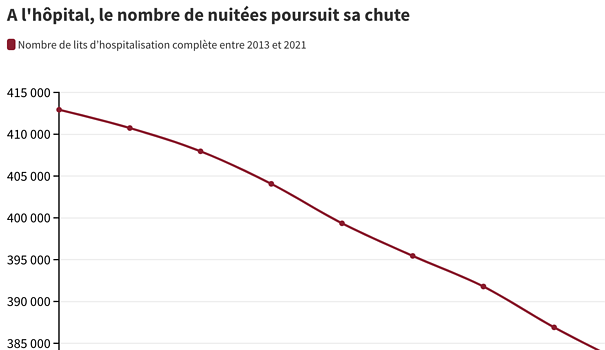 Where are the reception capacities of the hospital, at a time when the Covid-19 is once again circulating at a high level in France? This Wednesday, the State published the count of the various beds in French establishments for the year 2021. First observation: if the Omicron variant and the vaccine drastically reduced the number of serious cases, in 2021, the hospital maintained a strong mobilization in intensive care. In addition, the shift towards ambulatory care undertaken under the previous five-year terms, which consists of closing overnight beds to open partial hospital beds, day or at home, has continued despite the health crisis.

In addition to the Covid-19 epidemic which again led, last year, to the closure of services and double rooms, hospital capacities suffered from "staff constraints that did not allow the beds to be maintained", explains the 'public body. As of December 31, the 2,984 public and private hospitals had 382,587 full hospitalization beds, ie 4,316 less in one year.

In total, more than 21,000 beds were eliminated between the end of 2016 and 2021, corresponding for the most part to Emmanuel Macron's first five-year term. That is twice as much as under his predecessor François Hollande (- 10,000), but significantly less than during Nicolas Sarkozy's mandate (- 37,000).