Gabriel Amat, the mayor of Roquetas de Mars, yesterday said that it was necessary to open El Canarete during rush hour in the morning and afternoon to ease traffic congestions on the Autovia del Mediterraneo. 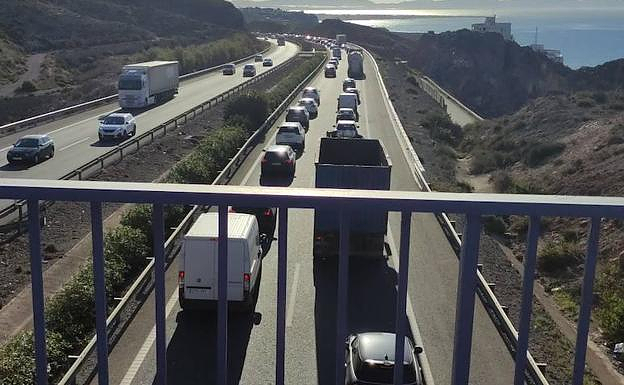 Gabriel Amat, the mayor of Roquetas de Mars, yesterday said that it was necessary to open El Canarete during rush hour in the morning and afternoon to ease traffic congestions on the Autovia del Mediterraneo.

In statements to Onda Cero Amat stated that he had transferred the request to Juan Ramon Fernandez as acting sub-delegate. Fernandez would have promised to review it with technicians. Although this measure had been considered on previous occasions, the first mayor reminded that it was conditional on safety and technical options based on the repairs that are being made in the face the most recent landslides.

The Ministry of Transport, Mobility and Urban Agenda of Spain (Mitma), has signed the works contract to adapt and improve the road and circulation conditions of Aguadulce tunnel, which is located on the A-7 motorway. It cost 6,4 million euros (VAT inclusive).

In the Aguadulce tunnel, it is proposed to install an auxiliary gallery on each side of the tunnel in order to strengthen the evacuation systems, drainage system for toxic substances, and network of hydrants. The ventilation, lighting, security signaling system, public address system, and television circuit will all be upgraded, among other things. This action is part the Recovery, Transformation and Resistance Plan (PRTR).

Amat said, "I don’t want to make policy of this." He then criticised that "we don’t know how the projects to improve the A7 are". According to Amat, the previous Mariano Rajoy government had stopped "working". Amat referred to the third railway, which was a project that the Zapatero government had begun to prepare. The last thing we know is that it was being drafted. He also mentioned the remodeling of El Parador's 429 El Parador junction to increase its capacity and add a second that would connect directly to the Bypass. This was approved by the Government in the beginning of last year.

"Everything that can be done to have an improved and faster connection from Almeria, to Adra, is important", insisting upon improvements in El Parador which, according to his assurances, will benefit Poniente all.

‹ ›
Keywords:
AmatPideAbraCanareteHorasPuntaAliviarTrafico
Your comment has been forwarded to the administrator for approval.×
Warning! Will constitute a criminal offense, illegal, threatening, offensive, insulting and swearing, derogatory, defamatory, vulgar, pornographic, indecent, personality rights, damaging or similar nature in the nature of all kinds of financial content, legal, criminal and administrative responsibility for the content of the sender member / members are belong.
Related News