Alpujarra devotion to the Hermitage of Souls

Maria Sancer Manzano is the hermit of Blessed Souls of Mecina bombaron. 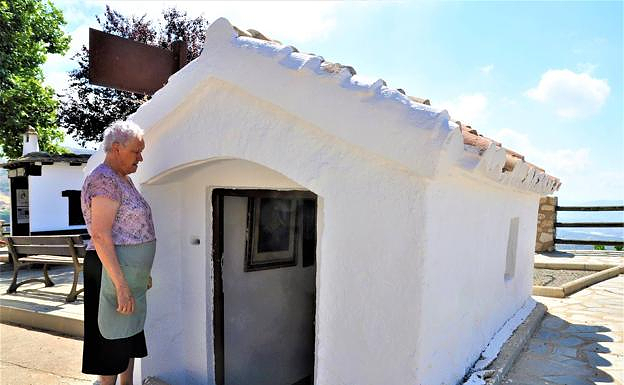 Maria Sancer Manzano is the hermit of Blessed Souls of Mecina bombaron. She is 83 years of age and has managed the small religious site for over three decades so it never lacks light throughout the year. Two sisters, now gone, assisted the hermitage years ago, who were known as 'Las Cervillicas'. Maria and Isabel were the first to hold this position. Rosario, Maria's daughter, was her assistant for a brief time.

Maria goes to the hermitage every single day. He is often found near her home. She uses the money she earns from alms to purchase candles for the small enclosure at the town's entrance. Some people also bring him luminaries. Maria discovered three boxes of thirty-unit candles at her door one day. Also, a piece paper was found with a note that read: "ma'am. Please put one every day until they run dry." Others bring bouquets of flowers. It is customary to pray next to the hermitage in order to express gratitude or ask for help, such as for something that has disappeared.

Maria Sancer says that many people ask the Blessed Souls to give them things, and they often grant them. They must also fulfill their promises. It's like a mysterious and supernatural agreement between two people who are in this world with one or more problems and a dead soul who needs to go to Heaven by the light provided. It is possible to do many things that seem impossible. I will give you an example. You can pray to the Souls before you go to bed to ensure they wake up when you want.

The hermitage of Blessed Souls of Mecina bombaron, which is located in the middle of the town, was established by an emigrant to Argentina. Although the cult dates back to the Middle Ages after the Christian Reconquest, it was intensified by Felipe I and Felipe 2. Maria Sancer says that the Blessed Souls take people's promises very seriously and can be vindictive. Someone who has something pending against them will not sleep peacefully, and they may experience strange events. She points out that there is a painting of San Nicolas de Bari, another San Nicolas de Bari, and another of Santa Rita de Casia in the small hermitage I care for.

Maria Sancer says that my mother used to take a bottle of olive oil and a few butterflies to the Animas Benditas hermitage in the olden days. Others did the same to ensure that there was enough light in the room. It was fashion back then. It was a short while ago that a stranger broke the lock to gain access to the donations. These donations would have been between ten and twelve euros. It cost him more to fix than the money he took. The Animas are amazing. As long as God allows it and I am given the key to the hermitage by them, I will take care of it. There are plenty of candles in this hermitage. There is also a hermitage in Mecina dedicated to the Virgen De los Remedios. However, there are no candles in this place. He concluded that the holy Rosary is prayed everyday in May and the May flowers are celebrated during this month.

The Blessed Souls of Alpujarra, Granada, and Almeria are worshipped in many places. The flame of the Souls can be found in Timar and Lobras as well as Juviles, Picena, Murtas. Turon, La Taha. Nieles. Fondon, Laujar De Andarax. Alcolea and Alboloduy are also found in Adra, Alboloduy and other nearby towns.

‹ ›
Keywords:
ErmitanaAnimasDevocionAlpujarra
Your comment has been forwarded to the administrator for approval.×
Warning! Will constitute a criminal offense, illegal, threatening, offensive, insulting and swearing, derogatory, defamatory, vulgar, pornographic, indecent, personality rights, damaging or similar nature in the nature of all kinds of financial content, legal, criminal and administrative responsibility for the content of the sender member / members are belong.
Related News