According to a new report by the World Meteorological Organization (WMO), a specialized agency of the United Nations, a mutually reinforcing dynamic between pollution and global warming will lead to a "climate backlash" that will affect hundreds of millions of people. 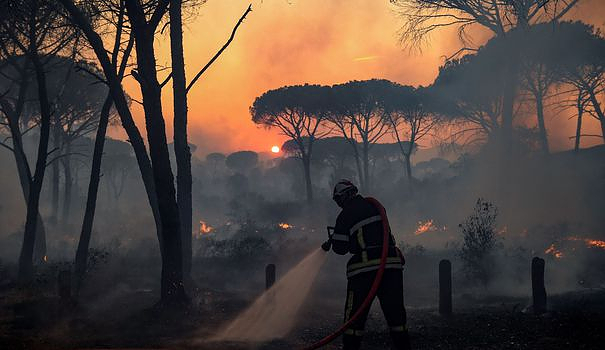 According to a new report by the World Meteorological Organization (WMO), a specialized agency of the United Nations, a mutually reinforcing dynamic between pollution and global warming will lead to a "climate backlash" that will affect hundreds of millions of people.

The annual WMO Air Quality and Climate Bulletin focuses specifically on the impact of wildfire smoke in 2021 when, as in 2020, heat and drought exacerbated the spread forest fires in western North America and Siberia, leading to a considerable increase in levels of fine particles (PM 2.5) harmful to health.

"According to projections, even if emissions are low, global warming will cause an increase in forest fires and the air pollution they cause," said WMO Secretary-General Petteri Taalas.

In a press release, he underlines that this phenomenon will have an impact on human health, but will also affect ecosystems because atmospheric pollutants are deposited on the surface of the Earth.

"We observed this process during the heat waves that hit Europe and China this year, when stable atmospheric conditions, strong sunshine and weak winds favored high pollution levels," he said.

Global observations show that the total annual area burned shows a downward trend over the past two decades, thanks to a decrease in the number of savannah and grassland fires.

However, on a continental scale, some regions show increasing trends, including areas of western North America, the Amazon and Australia.

Intense wildfires resulted in abnormally high concentrations of PM 2.5 in Siberia, Canada and the western United States in July and August 2021. In eastern Siberia, these concentrations reached levels that had " never been observed before" according to the WMO, mainly due to particularly high temperatures and dry soils.

As for what happened this year, it is "a taste of what the future holds, as a further increase in the frequency, intensity and duration of heat waves is at fear", according to Mr. Taalas.

This development could further degrade air quality under the effect of a phenomenon called "climate backlash", a term which refers to the amplifying effect that climate change has on the production of ozone at ground level to the detriment of the air we breathe.

According to projections, the regions where this phenomenon will be most sensitive - mostly in Asia - are home to around a quarter of the world's population, Lorenzo Labrador, chief scientist at WMO, told reporters.

Climate change, by intensifying episodes of surface ozone pollution, could therefore harm the health of hundreds of millions of people.

According to estimates by the Intergovernmental Panel on Climate Change (IPCC), the likelihood of catastrophic wildfires occurring (such as those observed in central Chile in 2017, in Australia in 2019 and in the western United States in 2020 and 2021) is expected to increase by 40-60% by the end of the century if emissions are high, and by 30-50% if emissions are low.