After 50 years in a suitcase, a "lucky" Liz Taylor dress goes up for auction

Many believed that the Christian Dior dress with a floral print at the bottom, with a red rosette at the waist, had been carefully preserved for more than 60 years in the archives of the fashion house. 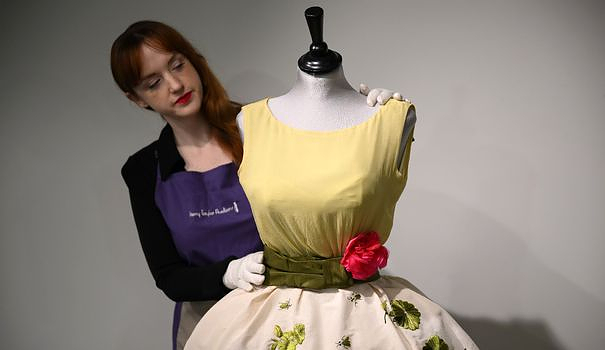 Many believed that the Christian Dior dress with a floral print at the bottom, with a red rosette at the waist, had been carefully preserved for more than 60 years in the archives of the fashion house.

But in fact, the actress had given it in 1971 with a dozen other clothes to a former assistant, Anne Sanz, who had kept it in a plastic suitcase, stored in a bedroom.

Elizabeth Taylor, accompanied by her fourth husband, singer Eddie Fisher, wore the dress created by Marc Bohan for the 33rd Academy Awards, convinced that she would not win. She had been nominated three times in the previous three years, without success. And his marriage to Eddie Fisher, previously married to the famous actress Debbie Reynolds had caused a scandal, Elizabeth Taylor being perceived as a home wrecker.

"She really didn't expect to win, having been passed over previously and because of all the negative press about Eddie Fisher," Kerry Taylor, whose vintage fashion auction house will be putting on the dress, told AFP. on sale on December 6, and expects between 40,000 and 60,000 pounds (46,500 to 70,000 euros).

After winning the Oscar for best actress for her role in the film 'La Vénus au Vison', the star considered the dress "a kind of lucky charm" and took it all over the world.

"She still carried it with her 10 years later. She didn't wear it for other occasions, she just liked having it with her," explains Kerry Taylor.

But Elizabeth Taylor's travel wardrobe grew increasingly cumbersome, sometimes with more than 40 huge suitcases, as she traveled the world in the 60s and 70s with her fifth husband Richard Burton, at the height of their glory, but also Anne Sanz and her husband Gaston, who serves as the actress' driver and bodyguard.

In 1971, opening her wardrobes at the Dorchester Hotel in London, and despite her sentimental attachment to her Dior dress, she told Anne Sanz, "take what you like".

She will also give her a white piqué cocktail dress and a matching bolero for her wedding.

Other clothes up for auction Dec. 6 include pieces from the Tiziani haute couture collection by Karl Lagerfeld and a black dress worn by Liz Taylor in the 1967 film "Boom," also by Lagerfeld.

Over the years, Anne Sanz has worn a few pieces and given others to friends and family members, never considering them particularly important or valuable.

"Anne obviously wore the piqué dress for her wedding, and she also wore a yellow and blue dress with matching coat," Kerry Taylor says.

"But in a way it was just second-hand dresses that belonged to Liz Taylor," she says. It was "before the notion of celebrity became what it is".

Elizabeth Taylor (1932-2011) made more than 70 films during her life, and won several Oscars and Golden Globes in particular. She had been married eight times.