A wonderful Good Friday with the brothers of Santiago, Cristo Yacente, and Silencio at Baza

Good Friday in Baza started with the procesional departure of Cristo del Descendimiento and the Virgen de los Dolores, which significantly altered its departure and route this year. 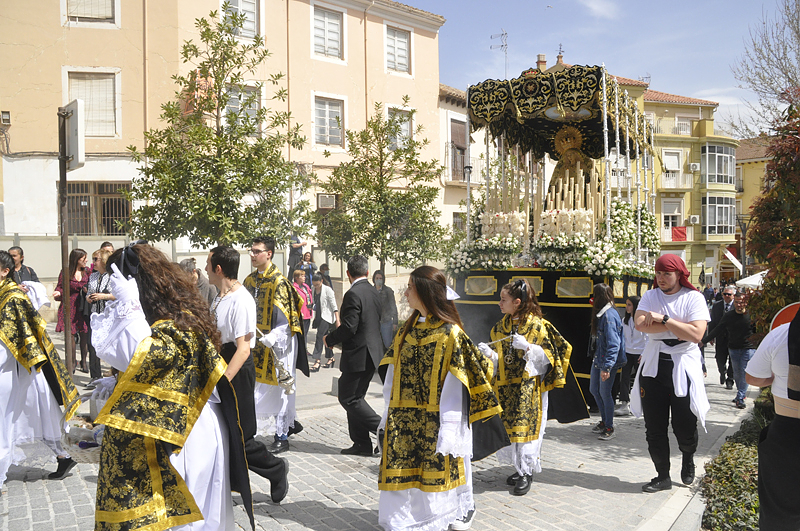 Good Friday in Baza started with the procesional departure of Cristo del Descendimiento and the Virgen de los Dolores, which significantly altered its departure and route this year. This was a wise decision, but it did not diminish the beauty of the procession that passed through Baza streets with particular relevance from the grandstand and official race. Alhondiga street was where the Brotherhood of the Holy Cross made a petalade for the Virgende los Dolores. This was followed by the Descent, the heaviest Holy Week, which was carried by the oldest gang of bearers from Granada. . The Mystery of the Descent passage is one of the most important in Andalusia. It contains seven images: Maria Santisima del Rocio, Maria de Salome and Maria de Cleofas. Juan Vega Ortega, Malaga's sculptor.

The Band of Bugles and Drums Expiracion De Quesada was responsible for the musical accompaniment of Descent.

The procession marched through the Canos Dorados, and reached the Carrera de Palacio. Supported by hundreds of people, they settled in the Alameda de Cervantes Park. They applauded the Descent as well as the Virgen de los Dolores's passage on a sack. This was one of the major innovations of the procession on Good Friday morning. After the restoration of Our Lady of Sorrows' canopy passage, the procession was able to debut a stretcher. The load of the bearers changed from two-shouldered workers into sack workers.

The 60-piece candlestick, which was also a first, was partially funded by a number of brothers who were kind enough to help in its acquisition. Jesus Gonzalez and Manuel Miron were the pioneers of this step.

After a two year hiatus, San Sebastian de Padul Cultural Musician Association Band is back under Victor M. Ferrer's direction. Ferrer is the composer of Cultural procesional marches like Mi Amargura, Albaicin, or Concha, and many other works dedicated to brotherhoods of Granada.

The parade left the Parque de la Alameda and continued down Alamillos Street to reach the Church of Santiago. Here, the Virgen de Los Dolores was presented with another petalade. Many people praised the hard work and perseverance of the bearers and bearers, and confined the two steps.

The second Good Friday procession in Baza was the one of the Parish and Sacramental Brotherhood of the Santisimo Cristo Yacente. It carried out the procession of the Santo Entierro. This procession only carries the music accompaniment of the Santo Angel Custodio Chapel of Granada.

At 12 noon, from the Iglesia de la Mayor and in complete silence, the Brotherhood of Silence of Our Lady of Sorrows began their season of penance. Two hoarse drums accompany the parade. Maria Isabel Martinez Aguayo Pardo is the older sister. Joaquin Mellado is the foreman. In 1736, the primitive brotherhood of Virgen De Los Dolores was established. Its essence is still preserved today.

‹ ›
Keywords:
EsplendidoViernesSantoCofradiasSantiagoCristoYacenteSilencio
Your comment has been forwarded to the administrator for approval.×
Warning! Will constitute a criminal offense, illegal, threatening, offensive, insulting and swearing, derogatory, defamatory, vulgar, pornographic, indecent, personality rights, damaging or similar nature in the nature of all kinds of financial content, legal, criminal and administrative responsibility for the content of the sender member / members are belong.
Related News