Former FCK-talent will be the match winner for Rosenborg

The former FC Copenhagen-talent Carlo Holse chose a good time to score his first goal in Rosenborg. Holse was the Sunday night winner with the scoring to 2-1 Holse was the Sunday night winner with the scoring to 2-1 in the away game against Brann in the best Norwegian superliga Eliteserien.

the Scoring was a little random, as Holse in injury time chasing the ball high up the pitch. After sloppy defending got the ball at Holse, who with something, which most of all looked like a tackle, got kicked the ball in an arc over Brann-goalkeeper Ali Ahamada.

the 21-year-old Holse contributed to the start of the current season for FC Copenhagen team, but slipped out and switched in January for the Norwegian team.

Rosenborg has not got a particularly good start to the season, and Sunday's victory was the first in the league in years. Rosenborg four points in the tenth, while Brann has seven on the fifth.

At Brann was the former Silkeborg and AGF-player Daniel A. Pedersen from the start in the midfield in the defeat. Pedersen was replaced four minutes before time. 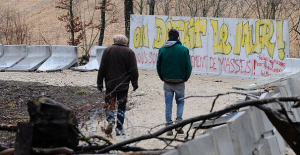 Opening of the appeal trial of opponents of the plan...