The Head of State, who chaired the Council of Ministers back to school, has just left the Elysée with Yvonne de Gaulle. 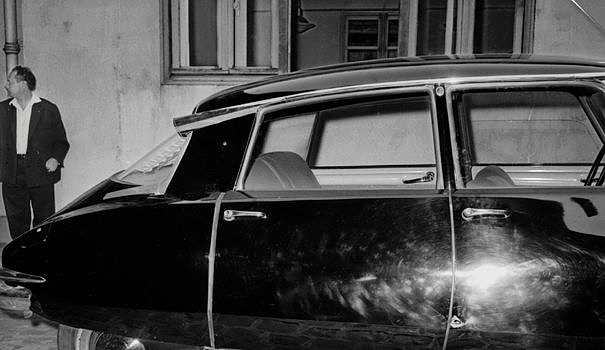 The Head of State, who chaired the Council of Ministers back to school, has just left the Elysée with Yvonne de Gaulle. Head to the Villacoublay military airfield to return to their home in La Boisserie, in Colombey-les-Deux-Eglises.

Virtually arriving at its destination, the DS Citroën, accompanied by an escort vehicle and two motorcyclists from the gendarmerie, is driving at high speed near Petit-Clamart, almost deserted on this Wednesday evening in August.

It's around 8:20 p.m., between dog and wolf. Along the road, a man waves a newspaper. Mastermind of the attack, Jean-Marie Bastien-Thiry, a polytechnician, has just given the signal.

The operation - code name "Charlotte Corday" - is carried out by conspirators moved by the same hatred of the "traitor" de Gaulle, accused of having precipitated the end of French Algeria and of delivering the country to communism. Pieds-noirs, former soldiers and students. The youngest is 20 years old.

Not very seasoned, this motley commando close to the OAS opens fire. First with a machine gun from a yellow dispatch rider. Then a second vehicle parked further.

The operation only takes 45 seconds. More than 150 bullets were fired, the presidential car had eight impacts, three bullets passed through the passenger compartment. The couple is covered in shards of glass but safe and sound. “Incredible coincidence!”, said the general in his memoirs.

They owe a debt of gratitude to the cold blood of their driver Francis Marroux - it was he who was already driving the presidential car, a year earlier, during the attack in Pont-sur-Seine, also sponsored, we will know later , by Bastien-Thiry - and their son-in-law, Alain de Boissieu, who, seated at the front, intimated "A terre, Père!"

On two rims and two tires, the DS reaches the nearby airport. Imperturbable, de Gaulle reviews, as always, the soldiers. He just slips to his son-in-law, getting on the plane without changing his plans: "This time, it was tangent!"

He almost died on the avenue de la Liberation. A shame for the man of June 18...

Author of the book "An attack", the historian Jean-Noël Jeanneney points to a "sum of coincidences" to explain this failure. And, above all, that "none" of the conspirators "was ready to die to reach their goal".

Weapons jamming, shooters not trained enough, will advance in 2012 to AFP a survivor of the commando. "Ah, dear friend, they shoot like pigs," laughed the general that evening on the phone with his Prime Minister Georges Pompidou.

Very quickly, the news of the assassination attempt spreads. "Failed attack against de Gaulle": Agence France-Presse publishes a first "flash" at 8:55 p.m. Followed by another: "Shots were fired shortly after 8:00 p.m. against General de Gaulle's car near Villacoublay. No one was hit."

We will learn later that a certain Mr. Fillon, driving in the opposite direction, was hit in the hand. Without gravity.

Strong emotion in the country, still on vacation. Even if the French, with the Algerian conflict, have lived in recent years to the rhythm of bombs, in a climate of permanent war.

Fine strategist, de Gaulle, who will still escape several attacks, will take advantage of this emotion. On the political level, the attack "timely", he confides, almost joyfully, to his minister Alain Peyrefitte after the shooting.

Before adding: "things are accelerating. We are experiencing a precipitate of history". In fact, he managed in this year 1962 to modify the Constitution for the election of the president by universal suffrage.

In the weeks following the attack, the hunt for the commando was successful. Quickly challenged, one of the weak links sits down to eat. Almost all the conspirators were arrested, including their leader, Bastien-Thiry, on September 15.

The trial opened at the end of January 1963. Before an exceptional court, the Military Court of Justice, nine men were in the dock.

Defended in particular by Jacques Isorni, Pétain's lawyer, and Jean-Louis Tixier-Vignancour, who would be a far-right candidate for the 1965 presidential election against... de Gaulle.

Three are sentenced to death. The general pardons two of them. Bastien-Thiry, 35, was shot on March 11. He will be the last death row inmate shot in France.

No question for de Gaulle to forgive the one who attempted the life of his wife. Equally fearless, "Aunt Yvonne" would have had, during the attack, this simple sentence, passed to posterity: "I hope that the chickens did not have anything". Allusion not to the police but to the poultry in jelly in the trunk...