60 years after the Cuban crisis, the idea of ​​a nuclear war again plausible

Russian President Vladimir Putin's nuclear threats to Ukraine have rekindled the peril of a nuclear confrontation and this time around experts are less certain there is a way out. 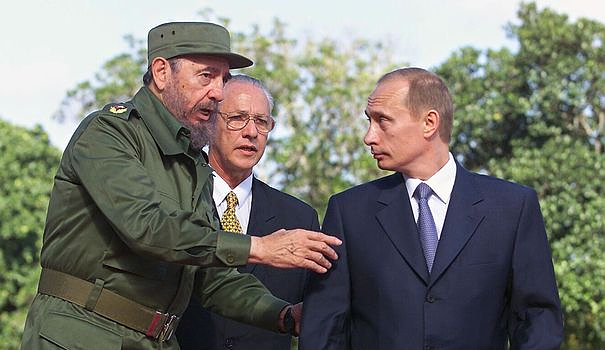 Russian President Vladimir Putin's nuclear threats to Ukraine have rekindled the peril of a nuclear confrontation and this time around experts are less certain there is a way out.

Joe Biden warned in early October that the planet was facing nuclear risk for the first time since 1962, noting that Mr Putin was "not kidding" in making these threats, while his military had proven "very poor" in Ukraine.

"We have not faced the prospect of an apocalypse since Kennedy and the Cuban Missile Crisis" in 1962, insisted the American president.

He wondered about "the exit doors" that Mr. Putin could borrow, but nothing says that the Russian president has this intention.

"I think this situation, more than any since 1962, can degenerate into the use of nuclear weapons," said George Perkovich of the Carnegie Endowment for International Peace.

"I've been working in this area for 40 years and it's the most delicate situation I've seen, because we have a nuclear power, Russia, whose leader has defined the situation as existential," adds he.

Unlike in 1962, the world is today confronted with several atomic powder kegs: North Korea which is preparing for a new nuclear test, India and Pakistan still in latent conflict, and Iran which has relaunched its nuclear program .

But Ukraine represents a unique risk, because the conflict indirectly opposes the two main nuclear powers. If Russia were to use atomic weapons, it would have to be a tactical nuclear weapon, weaker than the so-called "strategic" ones. But Mr Biden warned it would be difficult to use a nuclear weapon "without ending up bringing about the apocalypse".

Mr Putin, who questions the historic legitimacy of an independent Ukraine, has formally annexed four regions of the country and suggested that an attack on "annexed" Russian territory or direct Western intervention in the conflict could lead Russia to use of nuclear weapon.

The war in Ukraine differs markedly from the Cuban missile crisis: the question then was how to avoid a world war after the discovery on the island, in October 1962, of Soviet nuclear missiles pointed in the direction of the United States.

Washington's European allies did not understand at the time the United States' fixation on Cuba, an island located less than 150 km from the coast of Florida, and whose history is rich in American interventions.

But "Ukraine is far more important to US allies than Cuba was," notes Marc Selverstone, a Cold War historian at the University of Virginia. "Putin seems to want to change the borders in Europe and that is terrifying for Europeans."

In 1962, the goals of Soviet number one Nikita Khrushchev, while important, were more limited than those of Vladimir Putin today: Moscow sought to compete with the United States in terms of armaments and to obtain a bargaining chip with the West over Berlin.

A few days before the midterm elections, the political stakes were high for President John F. Kennedy, embarrassed by the failure a year earlier of the Bay of Pigs landings, supposed to overthrow the revolutionary regime of Fidel Castro.

But Kennedy rejected calls from some of his advisers to carry out air strikes against Cuba and chose instead to impose a naval blockade on the island, calling it a "quarantine", a term deemed less threatening.

Moscow dismantled the missile sites when the American president promised to withdraw missiles from Turkey and Italy.

"For Kennedy, the most important thing was to reduce the risk of nuclear confrontation", explains Marc Selverstone. "I don't know if that's Vladimir Putin's priority today. In fact, he seems to be upping the ante."

As in 1962, the allies on the ground of the two nuclear powers add a degree of uncertainty to the situation.

On October 27, 1962, while Khrushchev and Kennedy were communicating by messenger, an American U-2 spy plane was shot down over Cuba, and its pilot was killed.

Kennedy ignored calls to retaliate, assuming - correctly, as history showed - that the order to fire had not been given by the Soviets but by Cuba.

Khrushchev announced an agreement with the United States the following day. His son later said he feared the situation was spiraling out of control.

In Ukraine, President Volodymyr Zelensky has promised to capitalize on the military successes of his forces and retake all territory occupied by Moscow.

The United States has released billions of dollars in military aid to Ukraine but Mr. Biden has refrained from sending missiles capable of reaching Russian territory to kyiv, saying he wants to avoid a “Third World War” .

"Zelensky and Putin both adopted maximalist positions, raising the stakes, while in 1962, Kennedy and Khrushchev lowered them", underlines Marc Selverstone.

For George Perkovich, who worked with Joe Biden when the latter was a senator, the American president is as calm and broken with historical precedents as others in times of crisis.

But the times are different. In 1962, Russia agreed to keep the US decision to withdraw missiles from Turkey secret, aware of the political risks for Kennedy.

“Many crises in history have been resolved through secret diplomacy,” adds George Perkovich. With the media, social networks, "can you imagine today being able to keep an agreement like this a secret?"