Many couples are on their way to the forest stage. 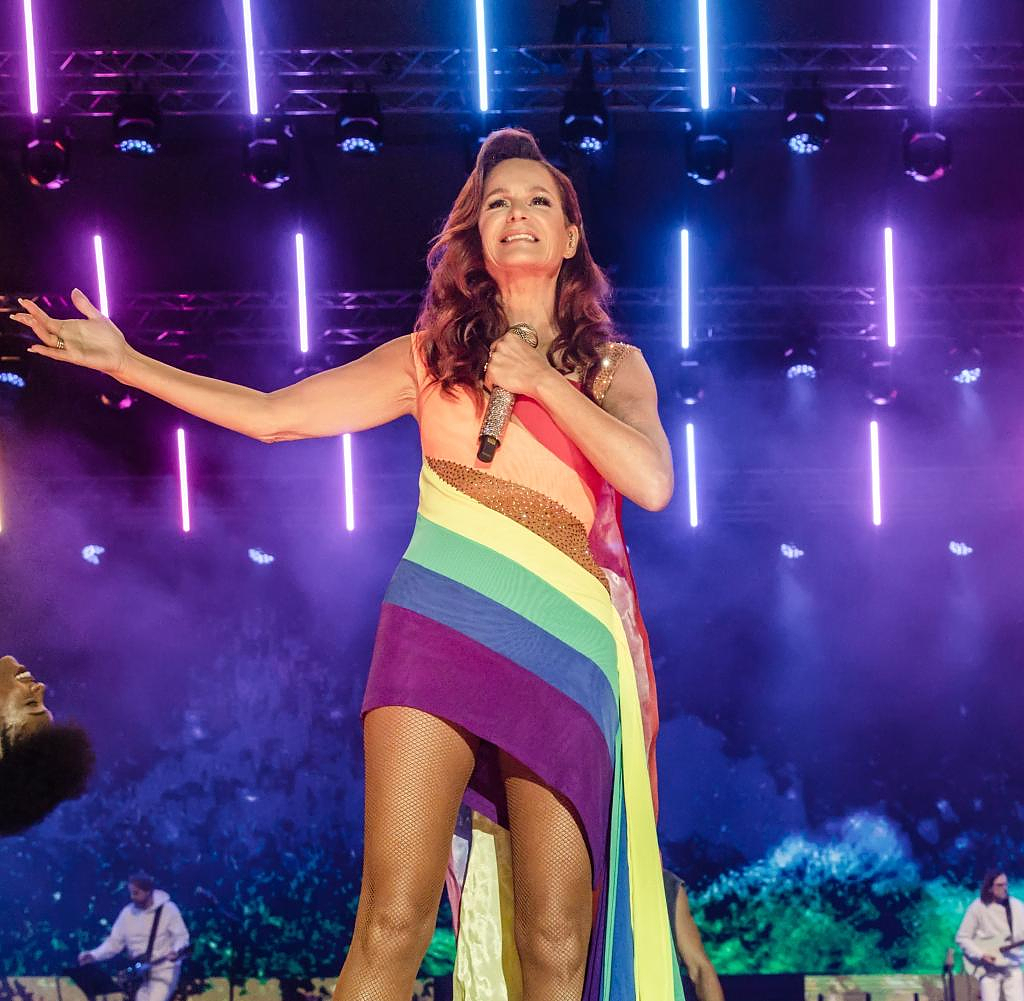 Many couples are on their way to the forest stage. To do this, they move in dense rows from the Pichelsberg S-Bahn station over the Elsa-Rendschmidt-Weg, which is surrounded by tall trees and becomes narrow when there is so much traffic. Women and men hold hands, swinging them back and forth in excitement. A lot of people wear plastic tiaras on their heads, very softly glowing crowns with three prongs, flashing hats or colorful fairy lights.

Around 7.30 p.m., when it is already dark, several way lanterns suddenly go out at the same time. A considerable distance is now in the dark. But after a few moments of queasy tension, a woman begins to sing: "And in the moonlight we two are undisturbed. / Just like a moment / That you only know / From the movies. / This night is worth every sin”. A second woman joins in, relieved, and then several others to encourage themselves with lines by Andrea Berg in the black pitch blackness.

When the path meets Glockenturmstraße, where the Waldbühne is located and where the lighting is working again, a few gentlemen standing around look around for potential customers. They grin lemonily when they realize that the singing concert-goers no longer need any further increase in mood through the piccolos they are offering for sale.

A few minutes later, a film on a screen above the stage shows Andrea Berg's life and career as a singer in fast forward. It can be seen that the 1980s were not far behind when she started her career. This is evidenced by Berg's hairstyles, which are initially reminiscent of the fringed bangs of Princess Stéphanie of Monaco, who also sings, and later of the curls of "Sandra", teased with lots of hairspray, who "never wanted to be Maria Magadalena".

Clocks then appear on the screens to the left and right of the stage, indicating that the show is about to begin. As the last ten seconds begin, the audience loudly counts down. Then there's a bang like on New Year's Eve and confetti snakes and fireballs dance in the air, the brightness of which blinds the viewer for a moment. This is obviously planned, because as soon as sight returns, the star of the evening has appeared out of nowhere.

Andrea Berg wears a costume in red, orange and yellow, the colors of the firebird, which she has sung about several times in her songs. Even today, 30 years after the release of her first album, it appears in the interim balance that the singer draws with the title track of her most recent work: "I would do it again." The "Firebird" should "fly with me again" because Andrea Berg lives "for the moment" and because "the dream is only ours". Six white-clad musicians join her from the back of the stage with guitars, bass, drums and several keyboards, while an equal number of dancers whirl around them.

On first hearing, "I'd do it again" sounds like the song contains romantic references to the fact that longing is irresistible and always right. For Andrea Berg, a longing heart answers questions as reliably as an oracle when it comes to life decisions. But the jubilation that this and the following hits like "Yes, I want", "Young, in love and free", "I want to live" or the older "The feelings have a duty of confidentiality" on this Friday evening in Berlin's West End also comes by Andrea Berg's friendly confidence and her wonderfully intact self-confidence.

She can even demonstrate the latter by simply putting a bare leg in front of her, as on the cover of the album "Seelenbeben", which is called "Seelenbeben". But she also stands there in concert, as if she could hold the earth with her foot so that the planet doesn't teeter too much to the rhythm of her songs. Berg's determination to use her leg for show sets her apart, which is why Berg's bare leg has come to feel like, well, a stand-out leg.

After three quarters of an hour Andrea Berg makes it very clear that life doesn't work without friends and announces one of them: Johnny Logan. The Irish singer, who won the Grand Prix d'Eurovision twice as a performer and a third time as a composer, sings the dramatic "You never walk alone" with Andrea Berg in a rocking leather jacket. vocal acrobatics that are rewarded with scene applause.

He then cracks his first joke before putting a bottle to his mouth by saying, "Imagine that: an Irishman drinking water." Then he sings "Hold me now" even more dramatically. After the last note, he points to the audience and makes a second joke, grading their performance in the singing contest style: "12 points to you."

According to Andrea Berg, Maite Kelly, who appears after Logan, the youngest daughter of the Kelly Family and solo artist, can also "call at two in the morning". She can exchange ideas with her "when it comes to men or simply if there is a need to talk". The song "Hello Houston", which the two sing together, has the effect of a recording of such a phone call: "Hello Houston, I have a problem / This can't go on like this / I urgently need a runway / So that I can land can."

After that, the audience is also ready for public dance lessons. Andrea Berg exclaims, "And now I want you to turn the Waldbühne into a Fox Trot Disco temple," and the couples begin to dance, not stopping until the end of the concert.

Andrea Berg says several times that evening how wonderful she thinks it is to play in Berlin. This may be a statement that is often heard, but even with a quick look at her biography, she seems absolutely believable. For most of her life, Andrea Berg fueled the intention to reach out to other people to help or entertain them. First on patients with serious, life-threatening illnesses, which the doctor's assistant at the time cared for medically. Then as Funkenmariechen, who entertained revelers at the carnival in Krefeld.

Incidentally, Andrea Berg sent a cassette with her songs to the producer Eugen Römer, who set studio appointments a few weeks later to record her first album. Since then it has been the other way around. Not only does the public come to Andrea Berg, she also repeatedly receives awards and honors, from multiple ECHO awards to golden tuning forks to the Cross of Merit with ribbon.

And now she sings at the end, very carefully, as if she didn't want to get too close to the songs of other artists, "The little pub in our street" by Peter Alexander and Reinhard Mey's "Über den Wolken", where freedom must be boundless. Then she falls silent and looks around, left, then right, as if just by looking to make sure she's done everything right. Everyone present in the Waldbühne understands what's going on here: the experience of singing in front of thousands of enthusiastic people who come to hear and see her has never worn off for Andrea Berg.

The audience begins, first reluctantly, then more and more determinedly, to clap, scream, then hoot and demand one "Encore!" after the next. At the end, Andrea Berg sings the bittersweet but also cheerful declaration of war:

I flew so high with you / But the sky was occupied /

I would do it again / With you, tonight."

Between the bar near home and freedom above the clouds, songs can arguably be limitless.

‹ ›
Keywords:
BergAndrea (Sängerin)SchlagerKonzertePichelsbergHoustonGlockenturmstraßeMusikAndrea BergWaldbühne
Your comment has been forwarded to the administrator for approval.×
Warning! Will constitute a criminal offense, illegal, threatening, offensive, insulting and swearing, derogatory, defamatory, vulgar, pornographic, indecent, personality rights, damaging or similar nature in the nature of all kinds of financial content, legal, criminal and administrative responsibility for the content of the sender member / members are belong.
Related News