So far, Senegal has not been at the top of the list of the most popular holiday destinations for Europeans. 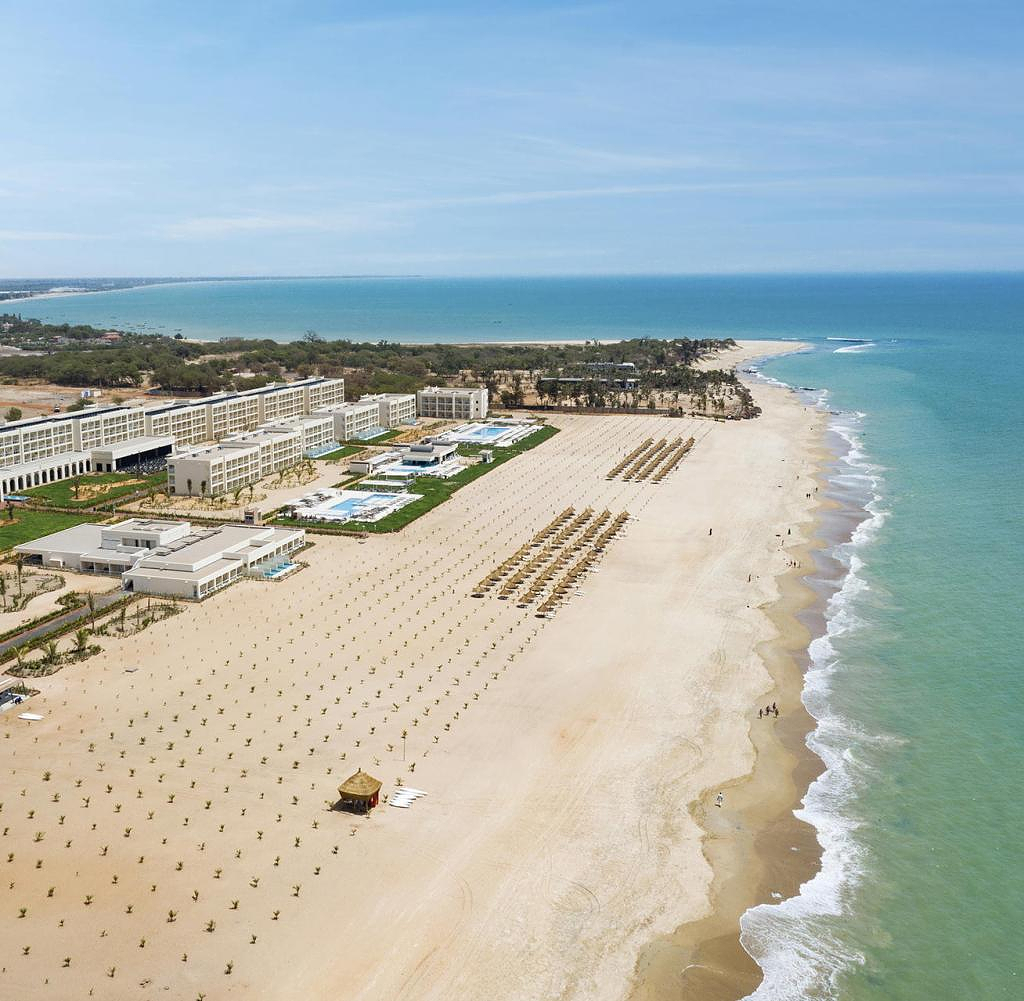 So far, Senegal has not been at the top of the list of the most popular holiday destinations for Europeans. This could change soon. The West African country with 500 kilometers of Atlantic coast and a pleasant climate is ideal for sun lovers who enjoy walking on long beaches and for explorers with an interest in the country and its people. In winter there is almost a guarantee of sun and temperatures between 23 and 30 degrees.

So far, Senegal has been the destination for a few adventurous individual tourists. But now new possibilities are opening up in the flat-rate area: From November 2022 there will be two direct flights per week from Düsseldorf to Dakar. With the opening of the beach hotel "Riu Baobab" in Pointe Sarène, Senegal immediately jumped to ninth place as an inexpensive package holiday destination in TUI's top ten ranking of the most popular winter destinations.

Omar Ngom can't be missed at Pointe Sarène. He walks along the wide beach in front of his home village as often as possible. He knows the question "Where are you from?" in many languages ​​- so he begins every conversation with walkers in front of the "Baobab" hotel, which opened in May 2022, in a friendly and unobtrusive way.

As soon as a building pit could be seen on the beach, he sensed his new professional opportunities as a tourism guide: "For us young people in particular, the hotel is an opportunity to stay in our village and not have to look for work in Dakar. Many have found jobs at the hotel, others are now carving our traditional masks and selling them to holidaymakers at the market. I myself offer guided tours to the “Pink Lake”, the Bandia Game Reserve and the Shell Islands.”

Omar particularly recommends that his potential customers visit the lion breeding station in the "Ranch de Bandia Wildlife Park": "You have never been so close to the lions," he promises. And he's right. It is a special kind of lion safari, which at first glance seems a bit strange, because the off-road vehicle has been converted into a cage on wheels.

As soon as it rolls through the gate into the lion park, it doesn't take long for the first pair of lions to appear. The two calmly approach the vehicle. They are used to this type of feeding, because hunting alone would not feed them due to the lack of wild animals.

The lions here are an import from South Africa. It is hoped that they will breed soon, as the big cats have become rare in West Africa. Poaching, trophy hunting and urban sprawl contributed to this over the centuries. The less pronounced safari tourism did not give the lions the status they have in East and South Africa.

The guide in the cab has a bucket full of fresh beef from the fridge. The first piece flies through the air in a high arc and lands on the cage roof. With two bold leaps and a short stop on the radiator hood, the lion jumps after it, grabs the meat and makes itself comfortable while eating on the cage roof.

Soon the first gnawed bone slips through the sturdy bars onto the seats below. While some safari guests cry out in shock, others bravely scratch the belly of the lion above them. He seems to like it. Most tourists in cage jeeps also seem to like this type of safari, but for some it is too unnatural and geared towards gimmicky tricks.

The lion sanctuary is part of the 16 hectare Bandia Game Reserve with 6000 animals. There you can also go on a classic safari in open jeeps, where encounters with rhinos, buffaloes, giraffes, zebras, gazelles, baboons and exotic birds, such as the long-tailed starling, are guaranteed. Only elephants and leopards are missing from the Big Five.

Impressive are the mighty baobabs, which can reach heights of up to 25 meters and have taken root all over the Senegal landscape. As true giants, they spread their branches over the thick trunk in all directions - they definitely have something majestic about them. As the national tree, the baobab adorns the coat of arms of Senegal on an equal footing with the lion.

The baobab is said to have miraculous powers. As a sacred tree of life, it is indispensable in every village as a symbol of health and well-being and as a meeting point for discussions and trade.

Traditional African medicine uses almost every part of the tree, for example the leaves for stomach and intestinal ailments, the seeds for toothache and malaria. With their high content of nutrients and lots of vitamin C, the oval fruits are now also considered a superfood in our latitudes.

A centuries-old baobab can also be found in the home town of tourist guide Roland Mannel on the Île de Fadiouth. Connected to the coastal town of Joal-Fadiouth by a 800-metre wooden bridge, the island is special in several ways.

The 15-hectare island was formed when large quantities of conch shells began to be dumped into the shallow waters of Mamanguedj Lagoon more than 1,500 years ago. The cemetery and the millet storehouses are located on two other small shell islands.

Roland Mannel is particularly proud of the coexistence of Christians and Muslims: “Muslims and Christians very consciously live together in peace here. We help each other, celebrate our holidays together and it also happens that a Muslim marries a Christian or vice versa. We are an example that different religions can get along well without being patronizing.”

Leopold Sedar Senghor, the first president of independent Senegal in 1960, poet and Catholic, laid the foundation with his policies for the good coexistence of the different faiths, which continues to this day in the state in which around 95 percent of the people belong to Islam. The house where he was born in Joal-Fadiouth is now a museum.

The most pleasant climate brings the dry season between November and June. This is also the best time for a jeep safari to Lake Retba, which then, depending on the time and the amount of sunlight, glows intensely pink and is therefore also known as the "Pink Lake".

This is ensured by the beta-carotene production of the alga Dunaliella salina. At 39 percent, the lake's salinity is six percent higher than that of the Dead Sea. Industrial mining of the salt from the lake is not permitted.

That is why men and women with a clear division of roles fetch the salt from the lake by hand: the men punt across the shallow water in barges, scrape the salt from the bottom and bring it to the shore. From there, the women carry it in vats on their heads to the street, where the salt is piled up for transport. A filled vat weighs around 30 kilograms.

The salt is mainly used to preserve fish and to flavor traditional dishes. And recently also as a souvenir for traveling Europeans.

Arrival: From November 3, 2022, Tuifly will fly twice a week from Düsseldorf to Dakar (flight time 6.5 hours), some with a stopover in Cape Verde (without getting off). Brussels Airlines flies to Dakar from several German airports with a stopover in Brussels, Iberia with a change in Madrid, Tap flies via Lisbon.

Corona entry rules: The EU’s digital Covid certificate with QR code is sufficient for entry. The WHO vaccination card alone is not enough. Unvaccinated persons and persons without complete vaccination protection must present a negative PCR test that must not be older than 72 hours. The Federal Foreign Office offers up-to-date information on its website.

Best travel time: In the winter months between November and May, the dry season prevails in northern Senegal with daytime temperatures between 23 and 30 degrees Celsius.

Accommodation: "Hotel Riu Baobab", the first hotel of the Spanish Riu hotel chain in Senegal, opened in May 2022, is located directly on the beach of Pointe Sarène, riu.com. In the north of Senegal there are some smaller boutique hotels near the beach, for example "Hotel La Résidence", Saint-Louis, from 65 euros per day (hoteldelaresidence.com). For adventurers, the "Camp du Désert" with overnight stays in a tent from 40 euros per day is an alternative (espritdafrique-Senegal.com/camp-du-desert).

Participation in the trip was supported by Riu Hotels. You can find our standards of transparency and journalistic independence at axelspringer.com/de/Werte/downloads.