The pilot agreement, concluded in Baden-Württemberg (south) and which should be valid in the other German regions, provides that this increase will take place in two stages in 2023 then in 2024, indicated the powerful union IG Metall in a press release, after several weeks of heated negotiations and numerous walkouts across the country. 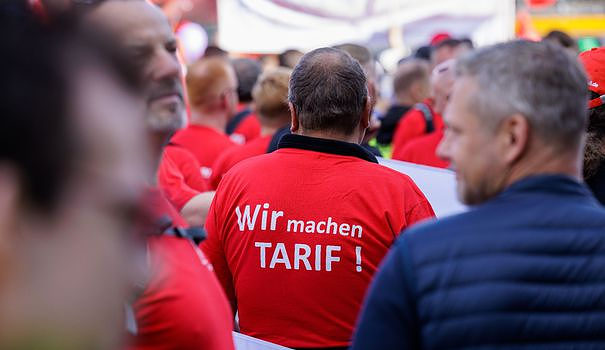 The pilot agreement, concluded in Baden-Württemberg (south) and which should be valid in the other German regions, provides that this increase will take place in two stages in 2023 then in 2024, indicated the powerful union IG Metall in a press release, after several weeks of heated negotiations and numerous walkouts across the country.

"Employees will soon have significantly more money in their pockets - and this in a sustainable way", welcomed Jörg Hofmann, president of IG Metall quoted in the press release. An "inflation bonus" of 3,000 euros was also obtained.

The union initially demanded an 8% salary increase over twelve months, its strongest demand since 2008, for this strategic sector of Europe's leading economy.

It includes thousands of automotive, electronics and machine tool companies, and negotiations in electrometallurgy are therefore particularly scrutinized.

The employees had increased the pressure in Germany: first by demonstrations for several weeks, then since October 29 by "warning strikes", coordinated walkouts of limited duration which often accompany wage negotiations in this country.

If employers and unions had not reached an agreement, harder strikes of 24 hours threatened the country.

"We will not hesitate to strike, the order books are full, there is no reason not to win the case," union representatives had warned at the start of negotiations in September.

The employers' representatives, who initially considered the level of salary increase unrealistic, considered that the risk was too great: "A social conflict would have caused even greater damage", estimated the employers' organization Gesamtmetall in a press release.

“It is ultimately a costly deal but we can now focus on our work and do our part to overcome the announced recession as quickly as possible,” adds the organization.

Its president Stefan Wolf had warned of the burden represented by union demands at a time when many industries are already bent under the cost of energy. "Some are struggling to survive," he warned.

This agreement could send a signal to other branches that are negotiating or will start negotiating on salaries, such as the civil service sector. For some 2.5 million employees in this sector, the Verdi union is asking for a 10.5% increase.

In Germany, salary increases are negotiated branch by branch between trade unions and employers.

This standoff took place when inflation exceeded 10% in October in Europe's largest economy - unheard of since the beginning of the 1950s - due to the high cost of energy caused by the Russian war in Ukraine.

After a surprise increase in Gross Domestic Product (GDP) growth of 0.3% in the third quarter, Germany expects the next difficult months: Berlin expects a drop in GDP of 0.4% and inflation by 7% in 2023, according to the latest government forecasts.

As in other European countries, the decline in purchasing power in Germany generates discontent and social tensions which result in demonstrations against the high cost of living.

The government of Olaf Scholz has released a colossal envelope of more than 200 billion euros to relieve households and businesses, including several components including aid payments targeting the most vulnerable and the implementation at the beginning of next year subsidies capping energy prices until spring 2024.