Nadal: I thought I couldn’t finish the match against Fritz

Rafa Nadal, who won five sets against Taylor Fritz despite a muscle problem in his abdomen, was thrilled to be able to reach the Wimbledon semifinals for the eight time. 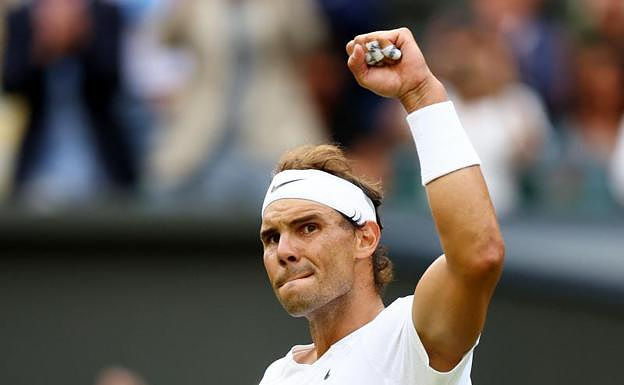 Rafa Nadal, who won five sets against Taylor Fritz despite a muscle problem in his abdomen, was thrilled to be able to reach the Wimbledon semifinals for the eight time. Balearic defeated his opponent and the problem that has plagued him since the beginning of the tournament, the Balearic admitted.

"I don’t know how I won. It's a great experience to play these games in front this crowd. It was a difficult match against Taylor, who has been playing well throughout the year. "It hasn't been an easier match at all, and I'm happy that I'm in the semifinals," Nadal said at the court's foot.

His father asked him about his health and he told him to quit in the middle of the second set. "The body is fine. But in the abdominal there's something that doesn't work. I have had to modify the mechanics of serving so it is less aggressive. Although I was worried that I would not be able finish the match, I have been aided by the energy on court.

It has been 14 years since his 2008 triumph against Roger Federer. Nadal admits that he didn't think he would be able to play at Wimbledon 2022. Even less to reach the semifinals.

He mentioned Nick Kyrgios from Australia, who was his last opponent on the way to winning the final. "I hope I can be ready to face him. He's a great player on any surface, but grass is his favorite. I must be 100% to stand a chance."

‹ ›
Keywords:
NadalPenseAcabarPartidoAnteFritz
Your comment has been forwarded to the administrator for approval.×
Warning! Will constitute a criminal offense, illegal, threatening, offensive, insulting and swearing, derogatory, defamatory, vulgar, pornographic, indecent, personality rights, damaging or similar nature in the nature of all kinds of financial content, legal, criminal and administrative responsibility for the content of the sender member / members are belong.
Related News