Debate for the LR presidency: Retailleau targeted by the duo Pradié - Ciotti

This is the lot of an American actor at the end of his career. 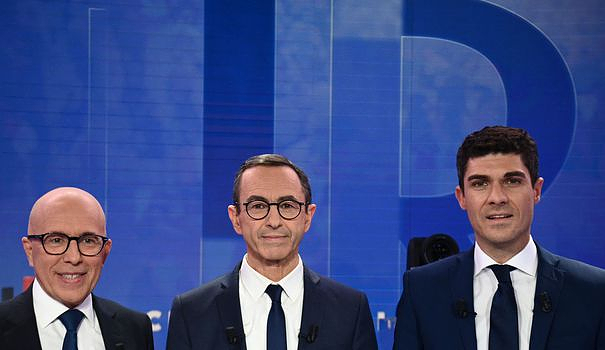 This is the lot of an American actor at the end of his career. After having touched the summits in their golden age, some action film actors end their careers in Direct-to-video, these nanars coming out on DVD without going through the cinema box. Same scenario, but tiny budget: the French right takes the path of these stars at the end of the race. A year after the presidential primary, the three Republican presidential candidates faced off on Monday evening in a single televised debate. The stakes were less, the cast less salient. No presidential candidate on the horizon to take the lead of a party in existential crisis, during the polls on December 4 and 11.

Éric Ciotti, Aurélien Pradié and Bruno Retailleau diligently recited their score, in an exchange marked by some clashes. Éric Ciotti, favorite in the race, dug the furrow taken during the 2021 Congress. He recalled his anchoring on the "right", insisting on his economic liberalism and his sovereign firmness. His challenger Bruno Retailleau has developed a similar political DNA, with his own style. "I want to gather on a clear line", assures the one who started because of fears aroused internally by a victory for the southerner. As for Aurélien Pradié, herald of a popular right, he played on his young age (36 years old) and his promise to "turn the pages".

The three applicants showed more nuances than real substantive differences during an exchange of 1h30 on LCI. Lower public spending, lower taxation and reduced immigration... The right has recited its traditional catechism. Falling to 5% during the last presidential election, the Republicans could not afford the luxury of yet another internal war anyway. "We should not put bread in a phone booth," confided an LR adviser before the debate. A few skirmishes, however, punctuated the exchanges. Their regular target: the boss of LR senators, sometimes sandwiched by his competitors.

Each claimant played on his strengths this Monday evening and corrected his weaknesses. At ease in the exercise of the debate, Éric Ciotti unfolds his positions with simplicity. His art of the formula is a hit with the members. Immigration? "No rights for illegal immigrants." The veil ? "A prison for women." Taxation ? "We win the tax world cup every year."

Accused by his critics of being too divisive, he takes pleasure in playing the man of "synthesis", as on pensions. While his rivals propose to increase the legal age of departure or the contribution period, he advocates an à la carte solution. Favorite of the competition, Eric Ciotti did not have much to gain in this debate. By skilfully mixing intransigence of substance and flexibility of form, the man did not stumble. And therefore scored points.

His main rival Bruno Retailleau had to catch up. The senator from Vendée recalled his liberal proposals and his civilizational discourse. When he evokes the resistance of the Ukrainian people, it is to better defend a "people who want to save their culture and their civilization." His speech is more technical than that of his rival, as when he evokes European case law, obstacles according to him to an effective migration policy.

Sometimes depicted as a "rad-soc", Aurélien Pradié took care to reaffirm his anchorage on the right. The deputy for Lot wants to halve the volume of immigration, express reservations about wearing the veil in public space, and makes the "massive regularization of illegal immigrants" a reason for government censorship. Whoever accuses the right of locking themselves in on sovereign subjects spoke to the hard core of LR members.

Here, no irreconcilable rights. The differences are minimal. On the economy, Aurélien Pradié and Bruno Retailleau criticize Éric Ciotti for insisting on his desire to lower taxes, not to mention a reduction in public spending. In ecological matters, the two deputies accuse their colleague senator of the content of the text on renewable energies adopted in the Senate.

Pradié-Ciotti against Retailleau. The history of the UMP against the former Villiériste. The senator from Vendée has been squeezed several times by his two rivals. Witness a pass of arms on the constitutionalization of abortion, to which he is opposed. Éric Ciotti: "The right cannot be cheesy." Aurélien Pradié: "We must not abandon Simone Veil's fights on the far left." The deputy of Lot recalls that François-Xavier Bellamy, active support of Bruno Retailleau, stumbled at the last European on this subject. In the Pradié camp, it is judged that the societal conservatism of the Retailleau right is an absolute brake on the reconstruction of the right.

This Pradié-Ciotti axis was observed at the end of the debate, around the method of appointing the right-wing candidate in 2027. The two men recall their opposition to the primary and instill doubt on the Elysian ambitions of Bruno Retailleau. Would his internal candidacy be just a stepping stone for 2027? "When it's blurry, there's a wolf," says Eric Ciotti, despite the senator's denials. The deputy of the Alpes-Maritimes wants the LR candidate to be appointed on the proposal of the political office? "We are not in China!", mocks Bruno Retailleau, in favor of a closed primary. Aurélien Pradié does not fail to remind him of his companionship with Philippe de Villiers.

In the Retailleau camp, the specter of a hidden deal between Eric Ciotti and Aurélien Pradié has been raised for several days for the second round of voting. A question of common political culture, more than of intellectual convergences. "Bruno is a foreign body for chiraquiens and sarkozystes", blows an LR adviser. The relatives of the senator accumulate the clues, despite the denials of the teams of the interested parties. Real or fantasized, these speculations should be fueled by the end of the debate.