Post a Comment Print Share on Facebook
Famagusta 25
DOLLAR 16,89
EURO 17,83
GOLD 992,10
BIST 2.554,08
Nara Capital prepares a 25 million fund to invest in biotechnology
The leadership of iDental is judged for a Social Security fraud of almost...
DKV explores new alliances with banks and does not see Spain as a "very...
US court allows Juul to continue selling e-cigarettes
The five councilors who challenged Sepi and her allies in Indra
Navantia loses 93 million after growing 20% ​​in 2021
Robert Langer: "You have to have vision to get rich with biotechnology"
Asterion buys the 'teleco' Olivenet and enters the battle of...
Insurers are reluctant to raise their prices due to escalating inflation
Santander and BBVA join the international mega-purchase of the aerospace...

The regional president, Isabel Díaz Ayuso, has called this Friday to defend Justice "in the face of any attempt to use or political control", as in her opinion some administrations intend, that by acting "outside the law" they behave in a "authoritarian and arbitrary". 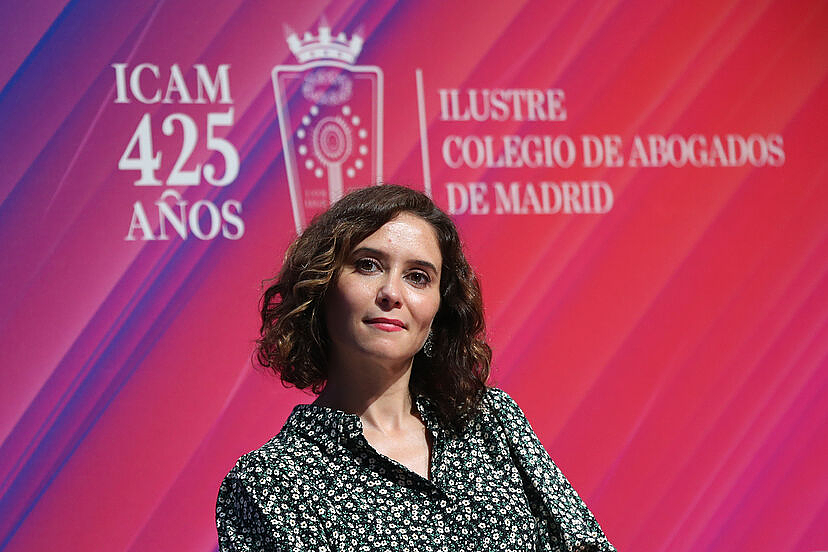 The regional president, Isabel Díaz Ayuso, has called this Friday to defend Justice "in the face of any attempt to use or political control", as in her opinion some administrations intend, that by acting "outside the law" they behave in a "authoritarian and arbitrary".

Both the president and the mayor of the capital, José Luis Martínez-Almeida, have participated in the closing ceremony of the conference with which the Madrid Bar Association (ICAM) has commemorated its 425 years of existence.

An appointment held at IE University and to which Ayuso has arrived accompanied by her Minister for the Presidency, Justice and the Interior, Enrique López, put in the spotlight this week by the appointment of Enrique Ossorio as regional vice president, which some have read as a decrease of the weight of López in the Executive caused by his position in the internal battle that pitted Ayuso against the former leader of the PP, Pablo Casado.

In his speech, Ayuso praised the work of this ministry, which has "key projects" ahead of it, such as the future City of Justice, the new judicial headquarters in Torrejón de Ardoz and Getafe, or the "complete digitization" of the judicial system.

All this with the aim of "modernizing, humanizing and improving" Madrid's Justice, a section where regional investment "will continue to grow year after year", guaranteeing "free legal assistance", "the duty shift" and "the improvement of conditions of the professionals who dedicate themselves to it".

In Ayuso's opinion, it is "a fundamental moment to vindicate the separation of powers and the robust and exemplary Spanish Justice", and has stressed that lawyers, together with the judicial system and the security forces and bodies, are "essential to guarantee the freedom of citizens.

For his part, Almeida stressed that the ICAM and Madrid are "inextricably linked" and that, without lawyers, "there would be no administration of Justice", being "a determining gear" so that any citizen "can be protected" before the courts.

And he has also stressed that the ICAM is "the largest professional corporation in all of Europe, with almost 76,000 members, to which one more will be added on Monday, himself, who had not done so" after 20 years of professional activity ". "On Monday I promise to ask for the papers to register" even if it is "as a non-practitioner", the alderman has promised.

The dean of the ICAM, José María Alonso, has highlighted the "great degree of collaboration" that the lawyers have with the Community and the Madrid City Council, and that "when there is will" and "loyalty" on both sides "things go well ".

He also recalled that "this has not always been like this", because even with other PP governments "in other times the work was not so easy"

‹ ›
Keywords:
JuridicoactualidadtendenciasJurídicoActualidad Y Tendencias
Your comment has been forwarded to the administrator for approval.×
Warning! Will constitute a criminal offense, illegal, threatening, offensive, insulting and swearing, derogatory, defamatory, vulgar, pornographic, indecent, personality rights, damaging or similar nature in the nature of all kinds of financial content, legal, criminal and administrative responsibility for the content of the sender member / members are belong.
Related News