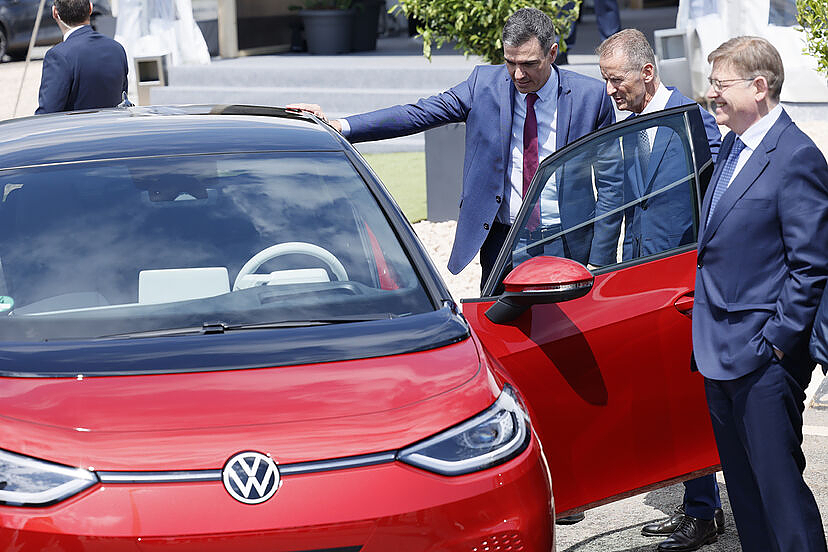 The term to present the candidate automotive projects to receive part of the European funds for 2,975 million euros from the Electric and Connected Vehicle Part (VEC) ended last night with the battery factories converted into the star initiative. Acciona, Volkswagen, Mercedes, Renault and Lithium aspire to build up to five facilities in Spain to equip future electric cars.

The Minister of Industry, Reyes Maroto, described the call as "successful" yesterday. Sources from the sector assure that, despite the magnitude of the announced figures -only Volkswagen's electrification plan in Spain amounts to 10,000 million-, the amount of public aid that companies will request will be much lower and may be below 2,975 million available. If so, all projects will be able to have resources.

The last of the big announcements related to battery plants has arrived this week in extremis. Acciona and the Chinese group Envision want to invest 1,000 million euros in a factory in Extremadura. They do not specify how much help they will need, but they do specify that the Chinese partner will assume most of the investments, which could rise to 2,500 million. Envision has appointed José Domínguez Abascal, former Secretary of State for Energy, as head of Spain. Among the participating companies are some reference providers such as Teknia.

This project would be the second battery project in Extremadura, after the one presented by Phi4Tech and Lithium Iberia, which starts from an initial investment of up to 400 million on a scalable basis.

However, the great battery plan for Spain is that of Sagunto (Valencia), led by Volkswagen and Seat, and in which more than 60 companies participate, including Iberdrola, Gestamp or Antolin.

Volkswagen's initiative is called 'Future: Fast Forward' and aims to mobilize 3,000 million euros for the Sagunto battery gigafactory, of which some 500 million will be aid from Perte, and another 3,000 million to electrify the car factories of Martorell (Barcelona) and Landaben (Navarra). The goal is for the gigafactory to start operations in 2026.

The plan is already underway and yesterday the Executive Vice President of Purchases of Seat, Alfonso Sancha, was in charge of presenting it to the Valencian businessmen, whose autonomous community has managed to snatch the project from Catalonia by offering, among other things, land and an accelerated processing of the files administrative. The Spanish brand wants nearly 80% of the plant's supplies to come from Spanish suppliers.

There are two other battery factory projects in Spain. Mercedes, which this Thursday conveyed to the unions its intention to address a historic investment of 1,200 million euros for the manufacture of electric vehicles in Spain, has also prepared its applications to receive European funds from the Next Generation program.

The plan of the German manufacturer, which assembles vehicles in Vitoria, has as its star asset a solid-state battery factory known as Basquevolt. The idea is to build it in the province of Álava with the support of the Basque Government.

The new Basquevolt battery company is already registered and for the moment its sole shareholder is CIC Energigune, backed by the regional administration, although there is interest from Petronor, CIE, Iberdrola, Irizar, Mondragón, Enagas, Ingeteam, Ormazabal and Solarpack.

Renault completes the group of manufacturers interested in battery projects, with a possible plan for Valladolid. Stellantis goes to Perte with two projects with investments of 266 million to manufacture new vehicles, while the electromobility hub D-Hub, which aspires to reactivate the Nissan plant in Barcelona, ​​has also requested aid associated with projects for 305 million in the that Cellnex or Wallbox participate.