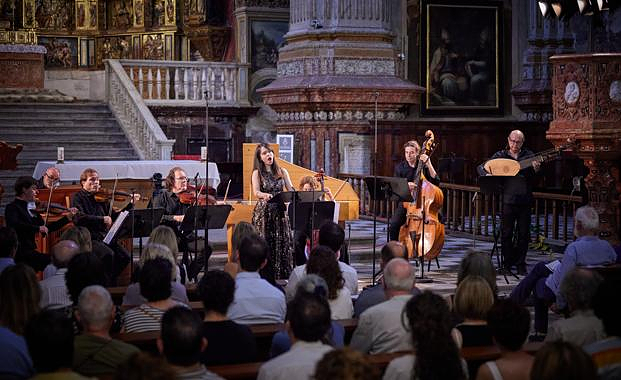 A septet led by Andoni Mero and featuring a face well-known for his years in OCG. Also, there is a soprano who sings three Hail to Virgin songs. This is another reason for the viability of the liturgical area, as this church, in addition to its exceptional sonority and dedication to the Virgin Mary according to what is written on the Siloesque dome's cartouches, is dedicated to the Virgin Mary.

This is an interesting coincidence, but the morning juxtaposed the cloudy sky with the calmness of the reserved music.

Alicia Amo, a skilled soprano in this repertoire, underlines Maria's regal status. She is young, but not flashy. With minimal makeup and restrained grace she holds on to the black lectern for a while, but once she lets go, she becomes rich in expressiveness and gestures.

The pieces were intertwined by Corselli and Pergolesi. In which the human voice sings for the Virgin or the death of Jesus Christ, the group headed by Mercero tested this sonority with instrumental works by Soler, Albero and the mentioned Corselli.

A catalogue of precious reverberations. An evident collusion between two violins. A play of nuances within the bass. The organ alternates with the harpsichord.

Clear sounds coming from a crystal voice modulated with the lips, and vibrated with your jaw. Companions who reproduce the pleasant sounds of baroque with their string quartet (viola, viola, and violone), adding the exotic and popular touch the theorbo to the mix, which is a distant friend of guitar.

Musica Boscareccia has already become an instrumental reality in the varied scene of friends who come together to make music at San Jeronimo. This is one of the most beautiful settings in Granada.

‹ ›
Keywords:
JeronimoEspacioIdealMúsicaBarroca
Your comment has been forwarded to the administrator for approval.×
Warning! Will constitute a criminal offense, illegal, threatening, offensive, insulting and swearing, derogatory, defamatory, vulgar, pornographic, indecent, personality rights, damaging or similar nature in the nature of all kinds of financial content, legal, criminal and administrative responsibility for the content of the sender member / members are belong.
Related News