The PP would approach the absolute majority in Andalusia, according to a survey

A week before the elections in Andalusia, a survey published this Sunday predicts that the PP would practically double the results obtained four years ago and will become the most voted force close to the absolute majority, with 36. 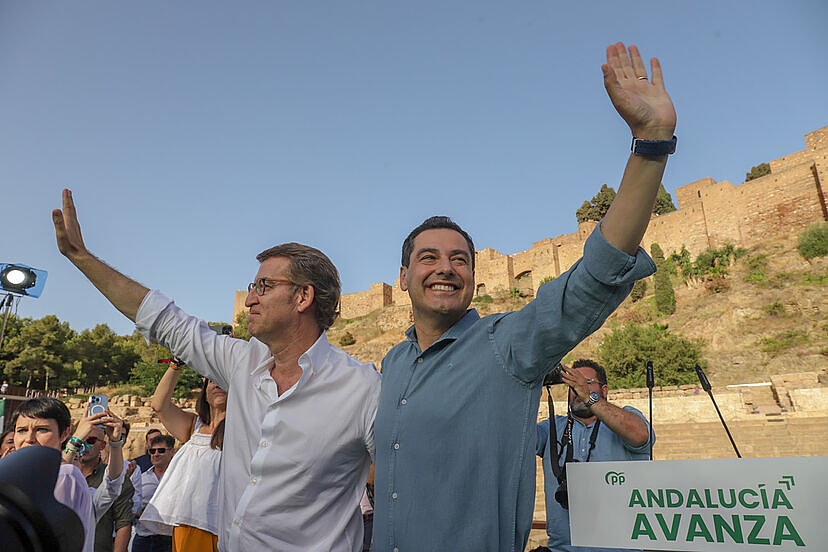 A week before the elections in Andalusia, a survey published this Sunday predicts that the PP would practically double the results obtained four years ago and will become the most voted force close to the absolute majority, with 36.6%, eleven points more than the PSOE.

According to the Sigma Dos survey published this Sunday by El Mundo conducted with 1,300 telephone interviews last week, the PP candidate Juanma Moreno would obtain between 45 and 52 seats -the absolute majority is 55- while the PSOE, to which the survey grants 25% of the votes, would achieve between 30 and 33 representatives in the Andalusian Parliament.

The data from Sigma Two shows few significant changes with respect to the one carried out in May in the attribution of seats, although it confirms the preferences of the voters.

Thus, the stagnation of Vox is consolidated, to which they attribute 14.9% and between 15 and 18 seats, and the possibilities that Ciudadanos will be left out of the Andalusian parliament increase, with between zero and two seats for Juan Marín.

To the left of the PSOE, the survey highlights a slight movement in favor of the candidacy of Teresa Rodríguez (Adelante Andalucía), to whom the survey grants three seats, one more than in the May delivery.

On the other hand, For Andalusia, the coalition that represents Izquierda Unida, Podemos, Más País, Equo, Initiativa del Pueblo Andaluz and Alianza Verde and which is led by Inma Nieto, gives up almost one point and keeps between eight and nine seats, one less than in the May poll.

By constituencies, the PP reaffirms itself as the leading force in the eight provinces, including in Seville, the impregnable fief of the Socialists, although where it achieves the greatest difference with respect to the PSOE is in Almería, with a gap of 22.6 percentage points and where the popular ones would take 43.7 of the votes if these forecasts are confirmed, according to the survey echoed by the Efe agency.

In addition to the Sigma Dos survey, the ABC newspaper published this Sunday another one from GAD3 focused on the Andalusians' assessment of the national political leaders and whether they consider that they benefit or harm the interests of their candidates for 19J.

According to the survey, 65% of Andalusians believe that the leader of the PSOE and Prime Minister, Pedro Sánchez, harms the options of his candidate Juan Espadas.

With Alberto Núñez Feijóo at the head of the PP, 62% of the voters of his party, according to the survey, are convinced that his participation in the campaign is positive for Juanma Moreno and his electoral interests, something that the voters of Vox who are the ones who most applaud the presidency in the acts of Santiago Abascal, since 76% affirm that it reinforces the expectations of Macarena Olona.

Also asked about the repercussion of the 19J elections on the national scene, 65% of those surveyed think that it will have a clear effect on the voting trends of Feijóo and Sánchez before the next general elections.