This has been announced today by the Ministry of Inclusion, Social Security and Migration, although it has specified that, in homogeneous terms, the increase in spending is 4. 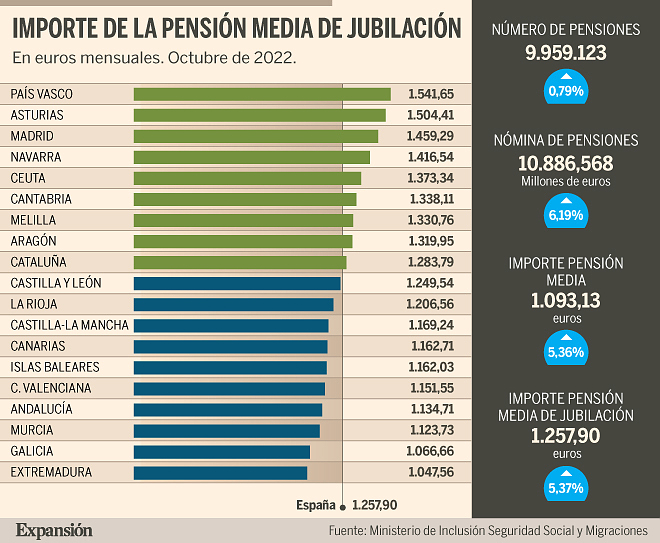 This has been announced today by the Ministry of Inclusion, Social Security and Migration, although it has specified that, in homogeneous terms, the increase in spending is 4.5% year-on-year.

The department headed by José Luis Escrivá estimates that pension spending stood at 11.8% of GDP in the tenth month of the year, a lower percentage than in 2020 (12.4% of GDP), a year conditioned by the impact of the pandemic on GDP, and also lower than that of 2021 (12.1% of GDP).

In October of this year, 9,959,123 contributory pensions were paid, 0.8% more than a year ago. Of the total pensions, more than 6.27 million were retirement pensions and 2.35 million were widow's pensions.

The average retirement pension reached 1,257.9 euros per month in October, almost 5.4% more than in the same month last year.

For its part, the average pension of the system, which includes the different types of pension (retirement, permanent disability, widowhood, orphanhood and in favor of family members), also increased by 5.4% year-on-year, to stand at 1,093 on October 1, 13 euros per month.

‹ ›
Keywords:
EconomíaGuía Pensiones
Your comment has been forwarded to the administrator for approval.×
Warning! Will constitute a criminal offense, illegal, threatening, offensive, insulting and swearing, derogatory, defamatory, vulgar, pornographic, indecent, personality rights, damaging or similar nature in the nature of all kinds of financial content, legal, criminal and administrative responsibility for the content of the sender member / members are belong.
Related News