Moreno attributes the "success" to the entire PP, with Feijóo "at the head", and sees the political change in Spain

The acting president of the Junta de Andalucía and winner of the regional elections by an absolute majority, Juanma Moreno, has attributed the "success" achieved on Sunday to the entire Popular Party, with Alberto Núñez Feijóo "at the head", and has predicted political change in Spain. 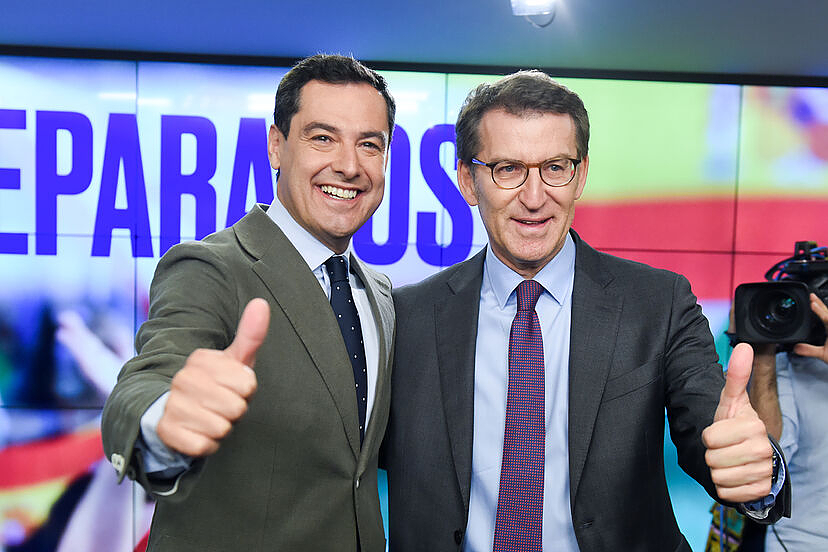 The acting president of the Junta de Andalucía and winner of the regional elections by an absolute majority, Juanma Moreno, has attributed the "success" achieved on Sunday to the entire Popular Party, with Alberto Núñez Feijóo "at the head", and has predicted political change in Spain.

This is how Moreno pronounced this Tuesday during his speech before the National Board of Directors of the PP, in Madrid, where he has arrived together with Núñez Feijóo and has been received with a standing ovation. "How can I not feel proud to be a member of the PP," said Moreno, who has received the embrace of other regional presidents of the PP, such as that of the Community of Madrid, Isabel Díaz Ayuso.

"This success that we have had is a success of yours -addressing Feijóo-, of the national leadership, of the entire Popular Party and of all the citizens who want a change in Spain", according to Moreno, who thanked the national president who has known how to "interpret Andalusia perfectly, which is not easy, coming from the north". "From the south they look at you with respect, with hope and thinking about the future", he has transferred.

He has insisted that the "success" on Sunday belongs to the entire party and to the Spaniards who "believe that a future and a better future can come and that politics can be done in another way." "And that is personalized by Alberto Núñez Feijóo, they are his style, with a way of understanding politics based on tolerance and with the ability to understand the plural and diverse society that we have in Spain."

"I predict great successes for you, which are neither for you nor for the party, but for the Spaniards. Spain needs a political change now, and you are going to achieve that", he told the national president. "Among all we have managed to make history and no matter how much personalization is attempted, what has been achieved is from a party and a political project", he pointed out.

For Moreno, the Popular Party is "building social majorities" that are going to sustain the policies that we want to carry out and project. He has indicated that Andalusia needs another government and another president in Spain and another way of understanding politics, far from the "arrogance" with which the current chief executive, Pedro Sánchez, acts, who does not hesitate to "punish" some territories to prioritize others based on their pacts are nationalist and independence parties.

"A government is needed in Spain that is aware of the Spanish from the south and that can only be done by you, we are doing well, but let's not trust ourselves because there will be obstacles," he said, addressing Núñez Feijóo. "You have the best project, the best team and your colleagues and friends from the PP", he transferred to him.

Juanma Moreno has indicated that he assumes the results with "more responsibility than with euphoria" and the absolute majority that the citizens have granted him. "I assume the enormous responsibility of governing the most populous community from moderation and balance and for all Andalusians, whether they voted for me or not", she has pointed out.

For Moreno, the PP has been able to "understand Andalusia", its diversity, its plurality and that not everyone "thinks like us", which is essential to govern". "We have understood that it is much better to reason serenely and do positive pedagogy than insult or raise your voice", he pointed out.

For Moreno, it is essential to have "feet on the ground" and not lose connection with society. "The absolute majority proves us right, it gives us the possibility of working more efficiently, we cannot act unilaterally or make decisions behind the backs of the citizens. We cannot lose our humility or the basis on which this political project is based" , as added by the acting president, who has assured that the PP is the "party of the people".

In his opinion, the support given by the absolute majority means that we have to govern as if "we had a minority government" and he has indicated that a very important effort is going to be made to protect Andalusian families.

"We want to make Andalusia great and make it one of the great economic and social locomotives", according to Moreno, pointing out that he aspires to Andalusia competing with the Community of Madrid, "in a good way".