War in Ukraine: the Ukrainian army entered Lyman, another setback for Moscow

Ukrainian President Volodymyr Zelensky assured on Saturday October 1 that his army, which now controls the strategic town of Lyman, will take over "in the coming week" other towns in the Donetsk region, annexed on Friday by Russia. 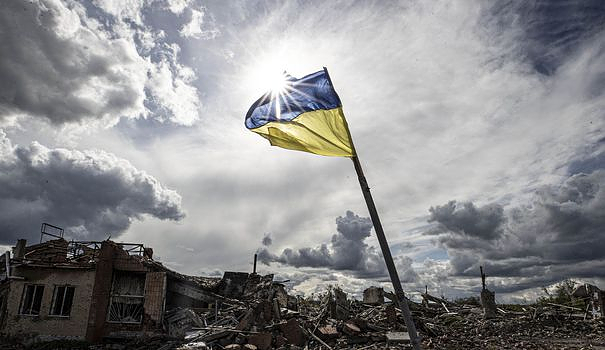 Ukrainian President Volodymyr Zelensky assured on Saturday October 1 that his army, which now controls the strategic town of Lyman, will take over "in the coming week" other towns in the Donetsk region, annexed on Friday by Russia.

"During the week, new Ukrainian flags flew over the Donbass", where the Donetsk region is located, Volodymyr Zelensky said in his daily address. "There will be even more in the coming week." The loss of Lyman, a strategic rail hub in the region, is a major setback for Moscow, which announced Friday the annexation of Donetsk and three other Ukrainian regions to Russia.

The Ukrainian army entered Saturday in Lyman, a city in the Donetsk region whose annexation the day before by Moscow was strongly condemned by kyiv and the West. The capture of Lyman was announced in the middle of the afternoon: "The Ukrainian air assault forces are entering Lyman, in the Donetsk region", the Ukrainian Ministry of Defense said on Twitter. In a one-minute video that accompanies the message, two Ukrainian soldiers are seen waving and then hanging the light blue and yellow national flag next to the "Lyman" sign at the entrance to the city.

"Threatened with being surrounded, the Allied troops were withdrawn from Lyman to more favorable lines," the Russian Defense Ministry said in a statement. Earlier on Saturday, the Ukrainian army claimed to have "encircled" several thousand Russian soldiers in the city.

At least 24 civilians, including 13 children, were found shot dead in their cars in northeastern Ukraine, near Kupyansk, regional governor Oleg Synegoubov announced on Saturday. “A convoy of cars with dead civilians on board has been discovered,” he said on Telegram. According to a preliminary count that he communicated, "24 people including a pregnant woman and 13 children" were killed. "The (Russian) occupiers attacked these civilians who were trying to escape the shelling [...]. They fired at point-blank range," he added. According to Oleg Synegoubov, governor of the Kharkiv region, where the bodies were discovered, "police and experts went to the spot" and "an investigation is underway".

German Defense Minister Christine Lambrecht made a surprise visit to Ukraine, her first since the start of the Russian invasion, when kyiv insistently demanded that Berlin deliver combat tanks. She traveled to the port city of Odessa in southern Ukraine, the German Defense Ministry said in a statement. She notably met her Ukrainian counterpart Oleksiï Reznikov. No NATO country has so far provided Western combat tanks to kyiv, which receives equipment of Soviet design. German Chancellor Olaf Scholz says he does not want to act alone in terms of arms delivery and only takes decisions in agreement with his Western allies.

"You will be killed one by one" as long as Russian President Vladimir Putin, who ordered the invasion of Ukraine, is in power, Ukrainian head of state Volodymyr Zelensky launched on Saturday to the Russians, and in particular to the Russians. government officials. “Until all of you solve the problem of who started it all, who started this senseless war against Ukraine, you will be killed one by one, becoming scapegoats, because you do not admit that this war is a historic mistake for Russia," Volodymyr Zelensky said in his daily address.

The United States would most likely know of Russian preparations for a nuclear attack on Ukraine, and Moscow might also want to know about it, experts say. After having suffered several military setbacks, the Russian president threatened to use "all means" to defend the territorial integrity of Russia, reviving speculation on the risks of a nuclear conflict.

A threat potentially extended Friday to the four Ukrainian regions annexed by Moscow. In the immediate future, military analysts relativize this risk. The White House says it has seen no activity indicating a plan of attack, but Western intelligence is closely monitoring the emergence of a real threat.

Gazprom completely suspended its gas deliveries for the day on Saturday to Eni, citing the "impossibility of transporting gas through Austria", announced the Italian hydrocarbon giant in a press release. "Gazprom told us that it could not confirm the delivery of the volumes requested for today (Saturday, editor's note) citing the impossibility of transporting the gas through Austria," said Eni.

This Saturday, "consequently, the flows of Russian gas destined for Eni through the Tarvisio entry point will be nil", he added. Most of the Russian gas delivered to Italy passes through Ukraine, through the TAG gas pipeline which arrives at Tarvisio in the north of the country, on the border with Austria.