UN General Assembly begins in a world beleaguered by crises

For nearly a week, some 150 heads of state and government from around the world will speak at this annual diplomatic high mass, which resumes in person after two years disrupted by Covid-19. 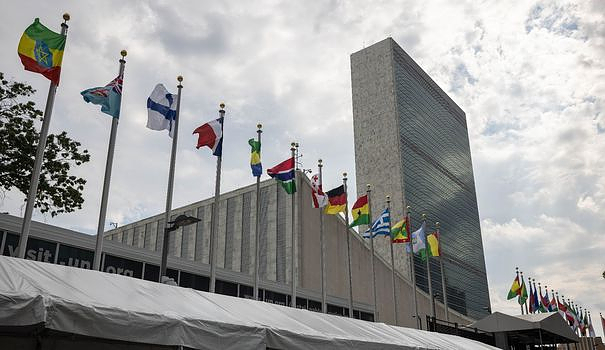 For nearly a week, some 150 heads of state and government from around the world will speak at this annual diplomatic high mass, which resumes in person after two years disrupted by Covid-19.

Traditionally, this first day gives pride of place to the speech of the American president who, as leader of the country hosting the United Nations headquarters, speaks in the first. But exceptionally – as on very rare occasions in the past – this will not be the case: Joe Biden, who was at the funeral of Queen Elizabeth II on Monday, postponed his intervention to Wednesday.

UN Secretary General Antonio Guterres will be there with an opening speech for this 77th General Assembly which "is not going to sweeten things up", promised his spokesperson Stéphane Dujarric, referring to a painting "posed, real and solutions-oriented" of a world "where geopolitical divisions put us all at risk".

"We meet at a time of great peril for the world," said Antonio Guterres on Monday, listing "conflicts and climatic disasters", "mistrust and division", "poverty, inequality and discrimination".

On the danger side, the invasion of Ukraine by Russia will be at the heart of this high-level diplomatic week, with an intervention on Wednesday by Ukrainian President Volodymyr Zelensky - by video thanks to a special authorization voted last week by member states -- and a Security Council on Thursday at the level of foreign ministers.

But the countries of the South are increasingly annoyed that Westerners are focusing their attention on Ukraine.

In an attempt to respond to the concerns of certain countries, Americans and Europeans are organizing a high-level meeting on Tuesday on food security, a consequence of this war from which the whole planet is suffering.

And French President Emmanuel Macron, who must be at the podium on Tuesday in the middle of the day, will insist on the need to prevent "fracturing" between countries of the North and the South, it is indicated at the Elysée, specifying that the Head of State will organize a dinner on this theme with several other leaders.

These tensions caused by the war in Ukraine echo the North-South resentment in the fight against climate change.

Poor countries, on the front line of the devastating impacts of global warming for which they are not responsible, are fighting in particular to ensure that rich countries finally keep their promises of financial aid.

Two months before the UN COP27 climate conference in Egypt, it would be surprising if this climate crisis was not prominently featured in the speech by Antonio Guterres who fought to reduce gas emissions greenhouse gases, in particular those of fossil fuel producers, one of its priorities.

Iranian President Ebrahim Raisi is also in New York this week for his first General Assembly and the nuclear issue could once again be at the center of discussions.

Even if the negotiations to save the Iranian nuclear agreement of 2015 officially take place in Vienna, the French Minister of Foreign Affairs Catherine Colonna, for example, has not ruled out a meeting between Presidents Macron and Raïssi.

This high-level week, however, has a few notable absentees, in particular Russian Presidents Vladimir Putin and Chinese President Xi Jinping.