Three shootings in South Africa last night and today resulted in the deaths of at least 21 people. 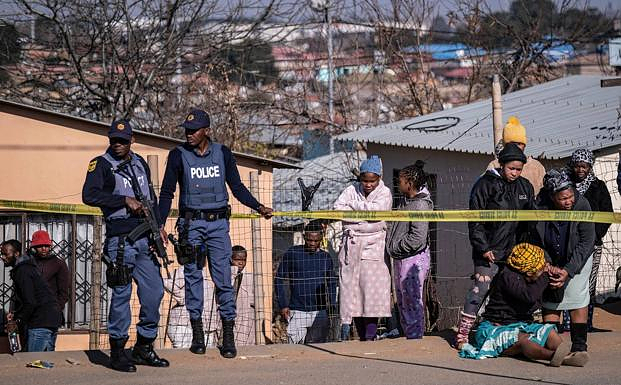 Three shootings in South Africa last night and today resulted in the deaths of at least 21 people. The National Police reported that fifteen victims were killed in one incident.

The 15 victims were identified during a shooting at Nomzamo Park Tavern, in Soweto, outside of Johannesburg. Nine more people were also injured.

The group of men responsible were identified only as an armed group who entered the premises carrying assault rifles and pistols, then fired at the clients "indiscriminately". They then fled in a white Toyota Quantum.

According to Nonhlanhla Kubeka, a police officer, another shooting took place in Pietermartzburg in KwaZulu-Natal. Eight people are now in critical condition.

In the third shooting, four people were also injured and two others were killed in Ekurhuleni in Gauteng province. "Four men, including one with 9mm pistols, entered a tavern, and started shooting at customers," Colonel Dimakatso Sello, a spokesperson for Gauteng Police, said.

After the June 26th death by poisoning 26 people in the Eastern Cape, South Africa, the shootings and violence at bars in the country have been a worrying trend for authorities.

‹ ›
Keywords:
MuertosTresTiroteosBaresSudafrica
Your comment has been forwarded to the administrator for approval.×
Warning! Will constitute a criminal offense, illegal, threatening, offensive, insulting and swearing, derogatory, defamatory, vulgar, pornographic, indecent, personality rights, damaging or similar nature in the nature of all kinds of financial content, legal, criminal and administrative responsibility for the content of the sender member / members are belong.
Related News