This park is still a shot ride to happiness

When you live far away from home, you want to show the children where your roots lie: your parents' house, the old village school. 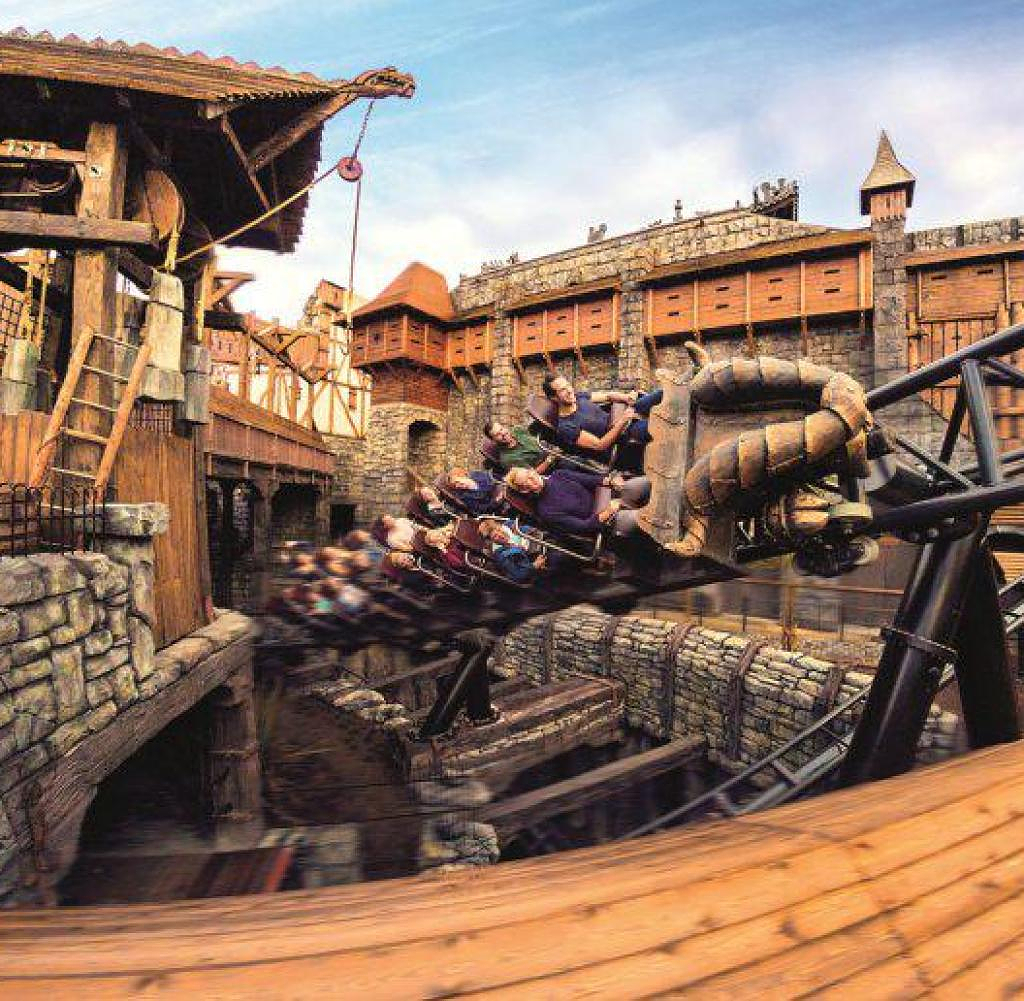 When you live far away from home, you want to show the children where your roots lie: your parents' house, the old village school. The forest playgrounds of childhood with their dark pools where you fished without ever catching anything. Father's grave. The honorable high school. And of course the sacred place of longing: Phantasialand in Brühl.

An hour and a half by car from home in Kleve, it was so close for me as a child and yet so far away. I would have gladly exchanged all three weeks of summer vacation (which we always spent at Walcheren in the Netherlands) and the vacation week in winter (always in Bödefeld/Sauerland) for a day at the amusement park near Cologne.

There were rollercoasters there, fast and daring, a boat trip on an enchanted lake, a miniature Bolle Berlin, carousels, a water ride and only food that children like – in short: machine-made adventures that match everything the Klever fair has to offer had to offer were far superior.

But it was all a horror to my teachers' parents. No begging helped, and even with the school class we always headed for the Romano-Germanic Museum in Cologne. The park remained Phantasia.

Years later, when I was almost a teenager, our housekeeper and her husband, a noodle salesman, took pity on me and the sisters for a day in Brühl - the best ever! A few years later, when I was already a reporter for Cologne’s “Express”, I snuck into the park with a colleague in the entourage of Michael Jackson, who was a frequent guest and friend of the owner family in his unencumbered times, and actually rode in the row in front of him Singer with the dark roller coaster. He exclaimed, "Eeeeeeeeeeah!" His face lit up happily in the gloom of the longest ride of its kind in Europe.

My daughters, six and nine, should have it better. So after a visit to grandmother (with an absolutely recommendable detour to the “Burger’s Zoo” in Arnhem) we checked into the hotel “Matamba” for two days – one of three places to stay in Phantasialand, there was nothing like that back then.

The gate opened, of course as if by magic, and we stood in a not so clichéd African village square. The family room was cleverly planned: a large four-poster bed for the parents and a small one in the alcove for the daughters. Everyone has their own area in a small space.

"Wow. Disney quality,” said the wife, because since our visit to the Floridian Mouse Wonderland everything has of course been measured against its gold standard. The Phantasialand can, that's already revealed, definitely keep up. Even without the big licenses for Donald and Darth, Mickey and Marvel.

We enter the park from the hotel over a bridge and are in “Deep Africa”, which immediately merges into “Mexico”, within sight and earshot of “Mystery” country and “China”, an amazingly pleasant blow to common sense should be handed in at the entrance anyway.

Everywhere the signature melodies of the parking areas blared from invisible loudspeakers, a train constantly whizzed by just a hair's breadth away overhead, occupied by screaming passengers. Add to that the amazing sound of hydraulic hissing and the smell of rail abrasion in the morning. It's all so close, so narrow, so compressed that it robs us of our senses - we need until the third day to orient ourselves. My earlier memories don't help a bit. Everything is different.

This labyrinthine upstairs and downstairs was created out of necessity and turned into a virtue. Because a repeatedly planned and requested expansion of the site has failed for decades (rare frogs, residents, greens, state government), Phantasialand, unlike Florida Disney, which has now spread over 11,000 hectares, only grew in on itself.

Old attractions were unsentimentally demolished and replaced with new, larger ones. The result is an insane overkill of parking experience in a small space. It's called "immersion" here - total immersion in the respective theme worlds.

This becomes particularly clear in the design of the roller coasters, which are not freestanding in the landscape like at a fair, but are built into spectacular scenery and, due to the lack of space, allow for very unique driving experiences. The best ride in the park, “Taron”, overlaps 116 times, in two places the cars are accelerated to 117 kilometers per hour and race in crazy meanderings, overcoming gravity, through extreme curves and spins. The “Black Mamba” is also fantastic, in which the cabins hang under the rail and throw us (me, that's nothing for the children) through the gorges and plastic hills of “Africa”.

Wait a moment! Africa? Is it even allowed to stage this in times of cultural appropriation and frowned upon Indian costumes? First of all: Yes, of course. Phantasialand is an amusement park and not an ethnological museum. You won't find raffia skirts and bony hairstyles, sombreros and giant mustaches glued on, geisha eroticism and slit eyes anyway - with this kind of trip-through-the-world it's no longer possible to make a pleasure state without Wokistic index finger activism. I remembered that differently too. Incidentally, all the relics of Western research in the scenes of the great and daring "Adventure Trail" - equipment, jeeps, hammocks - are shown as rotten and abandoned. Coincidence?

For do-gooders, the hardest part will probably be “Rookburgh”, a fictional alternative 1920s “steampunk” metropolis complete with its own hotel: coal, steam, smoke, oil-smeared barrels everywhere, gas-powered bicycles. Wonderful Instagram backdrops are everything in this Eldorado of fossil energy production. But it's just fun.

"F.L.Y." thunders through the tangle of tubes and lines, the only roller coaster of its kind: With a gentle rotation of the ride, the passenger initially leaves the usual horizontal plane and then hangs freely under the rail; in the position of a flying superhero you, like me, whiz through the city. Near misses (roller coaster for almost collisions) on the tape. Big!

It doesn't have much to do with the Phantasialand of my past. Even the roller coaster, on which Michael Jackson once enjoyed himself, has now been completely rebuilt and is a "VR ride": You put on virtual reality glasses and practically ride through an animated film, only with real shaking, rattling and falling. It goes like this - I'm more of a purist. Only in the rear part of the park can you still see the lake with its dragon boat ride, unfortunately closed, and the old-fashioned panorama ride on the high rail, once a highlight. This area is suspected to be the next renovation project.

He offers all kinds of gentle driving devices for the children - they should be preserved. Our daughters couldn't get enough of the chairoplane, they must have ridden it five times. Quiet, somewhat outdated attractions such as the rotating China house (just as a trick), the 4D film with the rain falling from the cinema ceiling and the “ghost rickshaw” with its animatronic ghosts were well received. In addition, the "crazy hotel", a charming retro fun with distorting mirrors and labyrinth, and the 3-D mouse hunt in what is probably the most beautiful waiting time scenery in the entire park.

What is actually missing, in addition to e-charging stations in the parking lots, is a really family-friendly roller coaster. The photo from the "Colorado Adventure" shows two rather tense faces and one worried face and one with a bad conscience. The latter is mine, as I had promised that the ride was “absolutely something for children too”.

After all, after a night of deliberation, the nine-year-old decided to take a second trip on the Boomerang coaster "Raik". And we all won't forget the 53 meter drop on the really grandiose "Chiapas" water ride. Our clothes are still drying. Handy if you can go straight to the hotel room and change.

In the evening we booked buffet restaurants, one Asian, one African. The latter was more interesting, more exciting – if you would like to test an ostrich or an alligator. Both offered authentic cuisine, at a surprisingly high level for a theme park (except Disney, where the restaurant food is always first class).

Whoever is in the park has a full selection from hamburgers to nachos, pizza and sandwiches to all the stickies in the world. The prices are okay, all dishes are made by their own gastronomy. Here, too, a milestone compared to the time when the smell of frying fat hung heavier in the air than the chlorine in the water ride.

Even though we had the long drive back to Berlin ahead of us, the girls insisted on going to the park on the last day as well. Once again into this wonderful tangle, once more the chain carousel, once more "Maus au Chocolat".

We got as far as the parking lot when the younger one asked: “When are we going to Phantasialand again?” What can I say? She's just my daughter!

Phantasialand is located in Brühl near Cologne on the A553 motorway, Brühl-Süd exit. The day ticket costs 57 euros from the age of twelve, from four to eleven years (and from 60 years) 47 euros, for the youngest admission is free. Those who have their birthday on the day of the visit also pay nothing. Until the end of January, the park's motto is "Winter's Dream", with partially discounted ticket prices. A family room in the “Matamba” hotel costs from 272 euros including breakfast. The hotel prices fluctuate seasonally and depending on the hotel (phantasialand.de).

Participation in the trip was supported by Phantasialand. You can find our standards of transparency and journalistic independence at go2.as/independence

‹ ›
Keywords:
BrühlKarussellsFreizeitparksAchterbahnenHuthPeterAchterbahnKölnPeter HuthAfrikaMexikoGrüneMichael JacksonBurgers ZooEuropaMatambaPhantasialandReise
Your comment has been forwarded to the administrator for approval.×
Warning! Will constitute a criminal offense, illegal, threatening, offensive, insulting and swearing, derogatory, defamatory, vulgar, pornographic, indecent, personality rights, damaging or similar nature in the nature of all kinds of financial content, legal, criminal and administrative responsibility for the content of the sender member / members are belong.
Related News