The world unanimous in its tributes to Queen Elizabeth II

Addressing "their thoughts" to the royal family and its people, heads of state or government said they were personally affected by the death of the sovereign who, in 70 years of reign, has met almost all the major leaders of the planet. 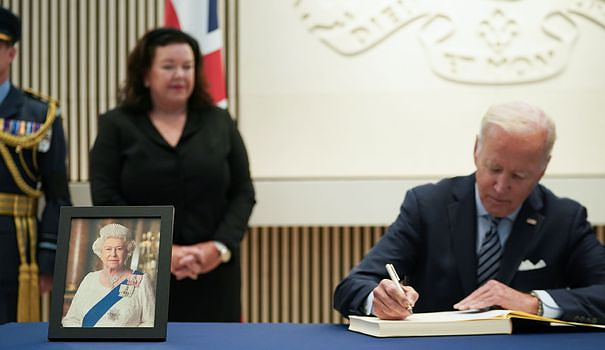 Addressing "their thoughts" to the royal family and its people, heads of state or government said they were personally affected by the death of the sovereign who, in 70 years of reign, has met almost all the major leaders of the planet. .

Minute of silence at the UN, Eiffel Tower deprived of its lights, flags at half mast on the White House but also in the Sultanate of Oman, days of mourning in Brazil or Jordan... marks of respect have multiplied in four corners of the globe.

Joe Biden hailed "a stateswoman of incomparable dignity and steadfastness". Elizabeth II was "more than a monarch. She embodied an era", added the American president, who signed in person the register of condolences opened in his honor by the British embassy in Washington.

His reign is defined by "grace, elegance and an unalterable sense of duty", added the former tenant of the White House Barack Obama.

"There are no words to pay tribute, even partially, to the paramount importance of this queen, to her sense of duty, to her moral integrity, to her devotion and to her dignity", according to the former chancellor German Angela Merkel.

Rarely, the death of Elizabeth II brought even the worst enemies to terms.

"For many decades, Elizabeth II rightly enjoyed the love and respect of her subjects, as well as authority on the world stage," Russian President Vladimir Putin commented.

In the United States, former Republican President Donald Trump agreed with Democrats Joe Biden and Barack Obama, praising a sovereign who, according to him, leaves "an extraordinary legacy of peace and prosperity".

"I keep the memory of a friend of France, a queen of hearts who forever marked her country and her century," reacted French President Emmanuel Macron.

She was also "a remarkable friend of Ireland", according to its president Michael D. Higgins, but also "a constant presence" in the lives of Canadians who "will always cherish her", according to Prime Minister Justin Trudeau.

In India, Prime Minister Narendra Modi also said he was "pained by his disappearance". The Argentine government expressed its "sorrow", the Turkish presidents Recep Tayyip Erdogan and Cuban Miguel Diaz-Canel their "sadness".

“We will miss her terribly”, predicted the Queen of Denmark Margrethe II.

The King of the Belgians Philippe and his wife paid tribute on Thursday to "an exceptional monarch who has deeply marked history".

The King of Spain Felipe VI even judged that she had "written the most relevant chapters of history" over the past seven decades.

His death leaves a huge void whose memory "will remain etched in letters of gold in the annals of world history", for the President of Pakistan Arif Alvi.

"His life and his legacy will be remembered around the world," said South African President Cyril Ramaphosa.

European Commission President Ursula von der Leyen hailed Elizabeth II as "a model of continuity", "whose calm and dedication gave strength to many".

"Throughout her rich career, she has been a source of inspiration and nobility," added the Emir of Qatar, Sheikh Tamim bin Hamad Al-Thani.

From Joe Biden, who first met her in 1982, to Angela Merkel who spoke of "the honor of receiving her" one last time at the end of her term last year, several personalities shared their memories. of the queen, including in unexpected enclosures.

The footballer Pelé has thus revealed to be a "great admirer" of the sovereign since her stay in Brazil in 1968, where she had attended a match in a crowded Maracana stadium.

"We will always remember her fondly, especially since she lived here when she was a little princess," Malta's Prime Minister Robert Abela also tweeted.