The University of Jaen's exhibition focuses on the Hercules of Alcala.

Marino Aguilera was the Mayor and Councilor for Heritage. 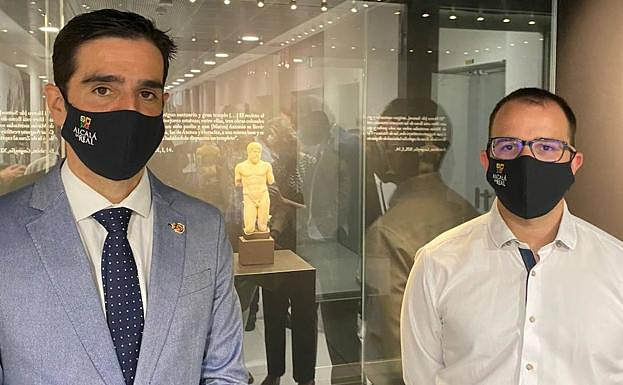 Marino Aguilera was the Mayor and Councilor for Heritage. Juan Manuel Marchal was also present at the UJA Teaching School. The former Teaching School of the University of Jaen (UJA) dedicated its "Invited Work" space to the Hercules of Alcala la Real as part of the exhibition 'Jaen within the National Archaeological Museum', whose inauguration took places yesterday.

The UJA thus opens its cultural program for 2020-2021. It invites you to experience this discovery, which was discovered in 1892 in the Consolacion orchards. In 1925, the State acquired the piece and it was transferred to the National Archaeological Museum of Spain. It is part of the museum's collection of Greek-Roman antiquities.

"For the first time in 95 year, the Hercules de Alcala return to the province Jaen," the mayor stated. This is an excellent opportunity to learn about one of Alcala’s most precious pieces of heritage. The University of Jaen and the National Archaeological Museum are both to be commended for their efforts in launching the project "Jaen at the National Archaeological Museum", which has made this reunion possible.

Juan Gomez Ortega, the University of Jaen's Rector, and Felipe Serrano Estrella, the Vice-rector of Culture and Sports of UJA, were also present at the opening. The curators of this exhibition, Pedro Galera Andreu and Mercedes Simal Lopez highlighted the artistic and technical qualities of this Roman copy of a Greek Original from the 5th Century BC.

‹ ›
Keywords:
HerculesAlcalainoProtagonistaExposicionUniverdadJaen
Your comment has been forwarded to the administrator for approval.×
Warning! Will constitute a criminal offense, illegal, threatening, offensive, insulting and swearing, derogatory, defamatory, vulgar, pornographic, indecent, personality rights, damaging or similar nature in the nature of all kinds of financial content, legal, criminal and administrative responsibility for the content of the sender member / members are belong.
Related News