The PSOE calls "ridiculous", the balance of Government of Moreno Bonilla's in the Huescar and Baza regions.

Olga Manzano (candidate number 2) of the PSOE in Granada to Andalusian Parliament described as "ridiculous” the balance of Government of Moreno Bonilla's in the regions Baza and Huescar. 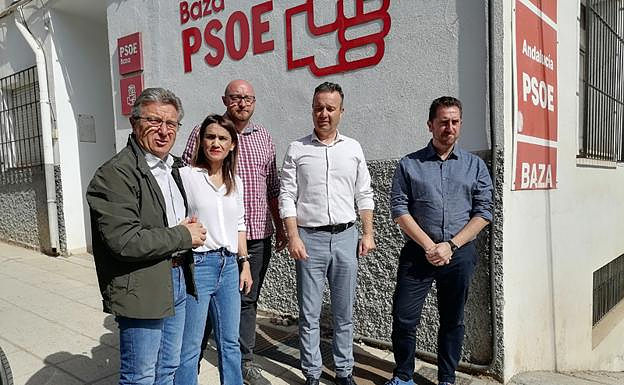 Olga Manzano (candidate number 2) of the PSOE in Granada to Andalusian Parliament described as "ridiculous” the balance of Government of Moreno Bonilla's in the regions Baza and Huescar. She also denounced the breaches over the past three and a quarter years and grievances that have caused "significant damage."

In Baza, together with the Secretary for Coordination of the Altiplano-Baza-Huescar Regions of the Granada PSOE, Abelardo Vico, and the mayors of Baza and Benamaurel, Manuel Gavilan and Juan Francisco Torregrosa, respectively; Manzano points out that the Board "has had no project or commitment to this land, in which it has been unable to take impact measures to improve the quality of life of citizens, solve their problems and make decisions for the benefit of our municipalities."

Socialists point out that Moreno Bonilla can only present them with a series of pending issues, and measures against the interests of the region. For example, inaction in processing a new decree to allow 12 million Euros from the Government of Spain to transform irrigation in the Baza area>>.

He also criticized the "dissatisfaction” that the Andalusian government has caused among users and professionals by dismantling the Baza Hospital.

Education: Lamenting the "lack of dialog and listening" of Education Delegation with Ampas and the "attempt” of the Board to suppress 1st or 2nd of ESO at six regions, such as Castril and Cuevas del Campo and Courts of Baza and Orce, Puebla de Don Fadrique, and Freila.

It has also "reduced" the aid for women's organizations and not renewed staff who in the Baza Court performed reinforcement tasks in the field of gender violence. It will delay procedures and leave women unprotected.

Manzano criticizes Moreno Bonilla in social services for choosing a low-cost dependency model. This allows for all cases to be solved in two hours per week or eight hours per month.

He says that they have suppressed Andalusia's Orienta Program in Baza, Huescar. This decision threatens rural employment and municipalism.

The lack of commitment in cultural and natural heritage is highlighted by the disappearance of economic aid for 19 years to maintain the enclaves of Tutugi and Castellon Alto. This despite promises of an Urgent Plan for Restoration, Conservation and Dissemination of Historical Heritage.

Manzano also highlighted the loss of intercity transport lines and inaction regarding infrastructure like the Almanzora motorway or A-4200 Baza Benamaurel, as well as the Baza bus station.

‹ ›
Keywords:
PSOECalificaRidiculoBalanceGobiernoMorenoBonillaComarcasBazaHuescar
Your comment has been forwarded to the administrator for approval.×
Warning! Will constitute a criminal offense, illegal, threatening, offensive, insulting and swearing, derogatory, defamatory, vulgar, pornographic, indecent, personality rights, damaging or similar nature in the nature of all kinds of financial content, legal, criminal and administrative responsibility for the content of the sender member / members are belong.
Related News