The Esequibo, a region of Venezuelan immigration, claimed by Caracas in Guyana

The Esequibo, sometimes also called Guayana Esequiba, is a territory of 160,000 square kilometers, under the administration of Guyana (125,000 inhabitants of the 800,000 Guyanese in 2012) and where English is spoken. 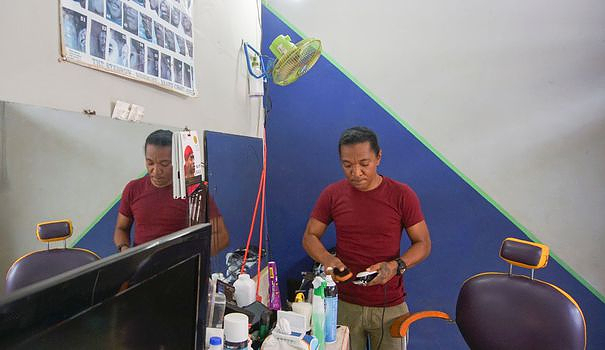 The Esequibo, sometimes also called Guayana Esequiba, is a territory of 160,000 square kilometers, under the administration of Guyana (125,000 inhabitants of the 800,000 Guyanese in 2012) and where English is spoken.

For this former British colony, the current borders, drawn by an arbitration court in Paris in 1899, are the correct ones.

But, for Venezuela, the Esequibo River is the natural border between the two countries, as it was in 1777...

Guyana launched in 2018 a procedure, still ongoing, before the International Court of Justice (ICJ) to confirm its current borders.

"The Esequibo is 100% Guyanese. We are very clear about where our borders are," Guyana President Irfaan Ali told AFP.

However, Venezuelan President Nicolas Maduro punctuates many of his speeches with "The sun of Venezuela rises on the Esequibo" and in schools as in the barracks, it is regularly repeated that the Esequibo is Venezuelan.

In September, Maduro again claimed the territory on the networks, posting a photo of Kaieteur Falls, Guyana's main attraction, with a map where the Esequibo is attached to his country.

"There is no debate, it is Guyanese. We have always spoken English. I learned that Venezuela demanded it when I finished school", insists Andrew Bailey, a 33-year-old mechanic, who adds: "now that there is oil..."

"They (Venezuelans) will always ask for it," said Kimtse Kimo Castello, cleaning his electric razors in his small shop. "I've always felt Guyanese. We're welcoming people. That's why you see a lot of Venezuelans."

About 25,000 Venezuelans, according to authorities, have fled the serious economic crisis in their country to try their luck in Guyana. Several thousand live in the Esequibo.

Ironically, in the past, Guyanese, once among the poorest people on the planet, migrated to Venezuela. Caracas automatically granted nationality to all those born in the Esequibo.

Anneris Valenzuela, 23, left with her husband, Tucupita, in the Amacuro Delta, one of the poorest regions of Venezuela.

"We had nothing. We couldn't feed the children," she explains. Her husband works as a day laborer. "Life is better than in Venezuela but it's hard. There is no electricity. We light up with lanterns."

Running water only comes intermittently. When it rains, the inhabitants take out cans, pots and other containers to collect water.

"It's hard," admits Alexis Zapata, 47, who lives with seven members of his family in two rooms of the building. The hammocks are hung on the walls next to each other.

"At least here we manage to eat every day even if we don't work all the time," he says, saying he left the village of Curiapo, also in the Amacuro Delta, in August 2021.

He explains that he chose Guyana for convenience: possibility of coming on foot, no smugglers or boats to pay, no police to avoid.

Unloading the boats arriving at Port Kaituma, he is paid "less than the Guyanese" who take advantage of the precariousness of the Venezuelans, according to him.

The Esequibo? “Venezuelan”, he assures. "That's what I learned and that's what's in the Venezuelan" books.

Most children of Venezuelans now go to school in Guyana where they will learn the opposite.

Paul Small, 52, who has dual Guyanese-Venezuelan nationality, learned at both schools. Born in Guyana, he went to Venezuela when he was 6 or 7 years old.

He spent most of his life there but returned to Guyana with wife and children.

Laborer, caretaker, painter... He lives much better than immigrants, living in a small house not far from the center of Port Kaituma.

"Life is better here. There is freedom, work, hospital health, security..." he said. For him, "Esequibo belongs to Guyana because it's been like that since I was born".