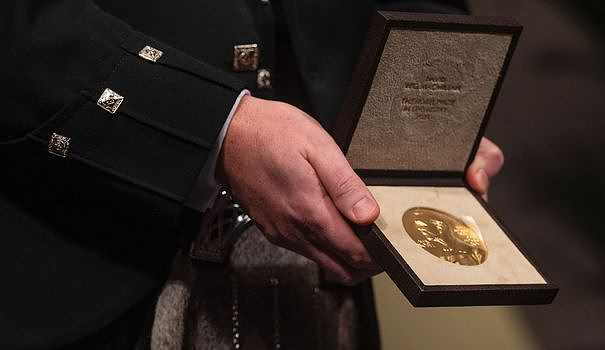 The prize is announced at 11:45 a.m. (0945 GMT) by the Swedish Academy of Sciences in Stockholm, ahead of the much-anticipated Thursday Literature and Friday Peace Awards, and then the most recent Economics Prize on Monday.

Who to succeed the German Benjamin List and the Briton David Macmillan? The two men had been crowned last year in chemistry for having invented a new type of catalysts to manufacture new molecules, at lower cost and in a cleaner way.

After a very masculine 2021 vintage (12 men and one woman, none for scientific prizes), the year 2022 continued on this trend, with the Nobels of Swede Svante Päabo in medicine and Alain Aspect (France), John Clauser (USA) and Anton Zeilinger (Austria) in physics.

Will a chemist be on the list this year? The American Carolyn Bertozzi, pioneer of "bioorthogonal chemistry" and professor at Stanford University, has been regularly quoted in recent years.

David Pendlebury, who maintains a list of Nobelisables in science for the Clarivate Institute, makes it his favorite this year, possibly in duet with his compatriot Stephen Lippard.

Bioorthogonal chemistry, a term coined by Mrs. Bertozzi, is a kind of "chemical reaction that you can initiate and observe in a living organism, but without disturbing or changing its chemical nature", deciphers the expert.

Lippard's work focuses on the action of metal ions in biochemistry, with applications in particular in chemotherapy against cancer.

- Two Nobels for an American? -

Another woman could be rewarded if the Nobel committee dares to crown a discovery with still very recent applications: messenger RNA vaccines, injected into hundreds and hundreds of millions of people to fight the Covid-19 pandemic.

At the origin of this advance, the Hungarian-American Katalin Kariko and her American sidekick Drew Weissman are often cited by forecasters for the price of medicine or chemistry.

But Nobel committees are reputed to be very conservative. They "tend to wait a long time before awarding a prize", underlines Linus Brohult, head of the science department of Swedish television SVT.

Especially since with other applications being studied against other diseases, “the messenger RNA vaccine may be something even bigger in a few years”, pleads the expert.

Still on the border between medicine and chemistry, another area could be sacred, according to him and other experts: that of synthetic tissues or regenerative medicine with these semi-artificial bones, skins, cartilages or veins.

In this regard, the names of the American Kristi Anseth and her compatriots Cato Laurencin and Robert Langer have been circulating for several years.

Chinese-American professor of chemical engineering Zhenan Bao, a specialist in artificial skins incorporating electronic circuits, appeared on the list of speculation this year.

Another possible choice would be the American Bonnie Bassler, an expert in the chemical communication of bacteria.

Unless the committee takes the resounding decision to designate the American Barry Sharpless, pioneer of "click chemistry" - a new form of combination of molecules - which would be the second Nobel Prize in chemistry, after a first coronation in 2001 for another discovery.

Only four people have achieved this feat in the history of prizes wanted by Swedish inventor Alfred Nobel.

Unless the committee leans towards metallo-organic networks, better known by their English term "metal-organic framework", a new class of porous materials. The Japanese Makoto Fujista and Susumu Kitagawa, as well as Omar Yaghi, born in Jordan but based in the United States, are pioneers in this field.

Like the other Nobel Prizes, the Chemistry Prize is endowed with 10 million crowns (around 920,000 euros), to be shared if necessary in the event of co-winners.