Strikes in Iran, the protests enter their 6th week

Mahsa Amini, 22, died three days after she was arrested in Tehran by morality police who accused her of breaking the Islamic Republic's strict dress code, where the veil is compulsory for all women in public spaces . 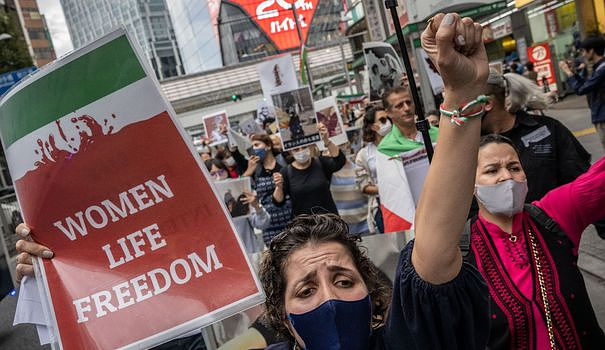 Mahsa Amini, 22, died three days after she was arrested in Tehran by morality police who accused her of breaking the Islamic Republic's strict dress code, where the veil is compulsory for all women in public spaces .

The crackdown on protests, the largest in Iran since those in 2019 against rising fuel prices, has left at least 122 people dead, including children, according to Oslo-based Iran Human Rights (IHR).

Iranian women, many bareheaded, were at the forefront of the protest movement, chanting slogans against power and confronting the security forces.

Activists have called for new protests on Saturday, the first day of the week in Iran, but it is difficult to gauge the scale due to restrictions on internet access imposed by the authorities.

“Saturday we will be together for freedom,” activist Atena Daemi said in a post on Twitter, accompanied by a photo of a bareheaded woman with her fist raised.

According to the online media 1500tasvir "strikes are being organized in towns including Sanandaj, Bukan and Saqez". The latter is the birthplace of Masha Amini.

Elsewhere in Iran, dozens of students cheered and sang during a protest at Shahid Beheshti University in Tehran, according to a video tweeted by 1500tasvir on Saturday.

Dozens of workers gathered outside a chocolate factory in Tabriz, capital of East Azerbaijan province, according to other videos that could not be immediately verified by AFP.

A teachers' union has called for a nationwide strike across the country on Sunday and Monday to denounce the crackdown which Amnesty International says has claimed the lives of at least 23 children.

In a statement, the Coordinating Council of Teachers' Unions said the "sit-in" would be a response to the "systematic oppression" of security forces in schools. He named four teenagers he believed killed in the repression - Nika Shahkarami and Sarina Esmailzadeh, Abolfazl Adinezadeh and Asra Panahi - and reported the arrest of a large number of teachers.

"Iranian teachers do not tolerate this tyranny (...)", he added, renewing his support for the protests.

Activists have for their part accused the Iranian authorities of carrying out a campaign of mass arrests and travel bans, the list including athletes, journalists, lawyers and celebrities.

On Friday, Iranian sportswoman Elnaz Rekabi, who according to the London-based BBC Persian and Iran International channels, was under house arrest upon her return from South Korea, thanked her supporters on Instagram.

The 33-year-old sportswoman was greeted at Tehran airport on Wednesday by a crowd of supporters. She had participated in a rock climbing competition in Seoul with only a bandana on her head, which was interpreted as a gesture of solidarity with the protests in Iran.

Overseas-based human rights organizations have expressed concern for the fate of the sportswoman who claimed her headscarf slipped off by mistake and issued an "apology".

On Friday, the Center for Human Rights in Iran (CHRI), a New York-based group, called on the International Sport Climbing Federation to do more to protect her.

Abroad, rallies in solidarity with the protests in Iran also continued with demonstrations in Tokyo and Germany.

Iranian leaders accuse Westerners of fomenting what they call "riots". The international community has condemned the crackdown and several countries as well as the European Union have imposed sanctions on Iranian leaders and entities.

Mahsa Amini's family have rejected the official medical report that Masha Amini died from illness and not from "beatings".