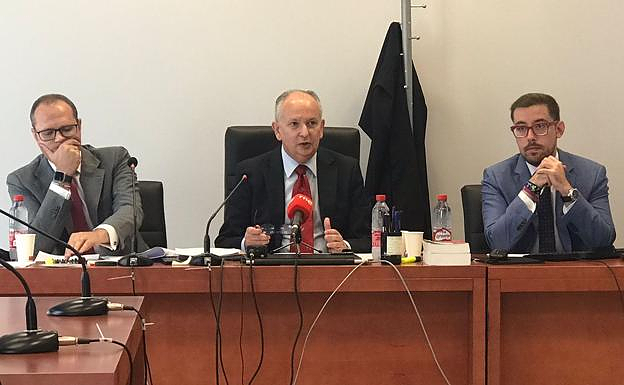 . Francisco Martin Huete (the senior judge of Roquetas de Mars), stated yesterday that organized crime groups have moved to Poniente almeria because of the police pressure in Campo de Gibraltar. This has led to an "increase in crimes" and they have demanded more resources as well as better conditions to allow judicial officers to do their work.

Martin Huete, president of the Provincial Court of Almeria Luis Columna, stated that organized crime "runs wild” along the 18-kilometre Roquetas de Mar coastline in relation to drug traficking. This also means that there are more "crimes against people" due to "sexual assaults and homicides", or "illegal detentions" as well as occupations.

With 130 nationalities, The characteristics and behavior of the party increase litigation. The mere existence of nationality does not in itself imply risk. But the combination of all does", said the dean judge. He also pointed out the lack of judicial police in Roquetas de Mar, which is home to the National Police station, despite the fact that it has more than 100,000 inhabitants.

Martin Huete says these determining factors create a breeding ground that has led to increased crime in Roquetas. The president of the Court also agreed to this aspect, understanding that organized groups are trying to introduce hashish to the Almeria coast through boats.

They testified thus that every week, police and judicial operations are conducted to repress drug traficking in the party, which leads to an increase of other types crimes.

The judges demanded that the Roquetas judicial district be elevated to the category magistrates in order to combat "high litigation". Six of its courts are supervised by judges. This historic and fair claim has been made in El Ejido as well. It is essential to stabilize the party, to settle the instructors' promotions to magistrates, and to obtain additional resources.

"We have been warning for some time that this is sinking is a problem, and that a lifeline is the elevation the category to magistrate but the Ministry doesn't respond," said Martin Huete. He hopes that Martin Huete's complaints will be a "turning point" that will allow him to find an "immediate solution".

They believe that at least 12 additional officials are necessary, as three of the six courts have "one less official than the others". At least four officers would be needed in the common notification service staff, while at least two would be required for the Civil Registry.

They also demanded reinforcement for the Court of Violence against Women and the appointment of an Administration of Justice (LAJ), with the exclusive dedication in common service, as well as functions of support or transversal reinforcement civil matters. The entire judicial district was to be re-elected and two territorial judges were appointed.

One of these judges would be used to strengthen the Court of First Instance and Instruction number 3. This court is also responsible for matters related to violence against females with 600 urgent proceedings per year on average. The same court has approximately 3,500 writings in pending provision. They have called their situation "serious."

Judges also considered it necessary to construct a new judicial building in the project phase for the municipality.

They also support the establishment of a new displaced headquarters of Institute of Legal Medicine (IML), and the creation of an area of territorial jurisdiction of the Public Prosecutor's Office. Roquetas courts expressed interest in creating a "modern judicial district" that would include Vicar, Felix and Enix in the Roquetas judiciar district. They currently depend on Almeria.

1) Elevation into the Magistrate category of the Judicial District Roquetas de Mar.

2) Equalization of all Courts' civil servant staff. Numbers 4, 5, and 6 have one fewer official than the rest.

3) An increase in the number of officials working in the common service notification, summons and embargoes (at minimum four additional officials).

5) Reinforcement and strengthening of the Court for Violence against Women.

6) The appointment of a Lawyer of Administration of Justice (LAJ), with dedication to the common service and the ability to support or transversally reinforce civil cases for the entire judicial area.

7) Appointment for transversal reinforcement of civil matters by a JIT in the Judicial District.

8) Appointment to Court No. 3. This would only deal with civil matters.

9) Provision of equipment and a space for videoconferences.

10) Computer solutions to problems caused by the new videoconferencing equipment

11) Construction of a building for the judiciary.

12) Creation of a new unit of justice (Court No. 7), Provision of a Prosecutor’s Office detachment as well as an Institute of Legal Medicine.

13) The creation of a modern judiciary district and the inclusion in the Roquetas De Mar judicial district of La Mojonera of the municipalities Vicar, Felix and Enix.

‹ ›
Keywords:
JuecesRoquetasExigenMediosAnteDelincuenciaDesplazadaGibraltar
Your comment has been forwarded to the administrator for approval.×
Warning! Will constitute a criminal offense, illegal, threatening, offensive, insulting and swearing, derogatory, defamatory, vulgar, pornographic, indecent, personality rights, damaging or similar nature in the nature of all kinds of financial content, legal, criminal and administrative responsibility for the content of the sender member / members are belong.
Related News