Philippines: diving pool or escape tunnel? Speculations around a huge pit in a prison

A huge grave discovered next to the official quarters of the head of the country's prisons, recently accused of ordering the murder of a journalist, is causing a stir. 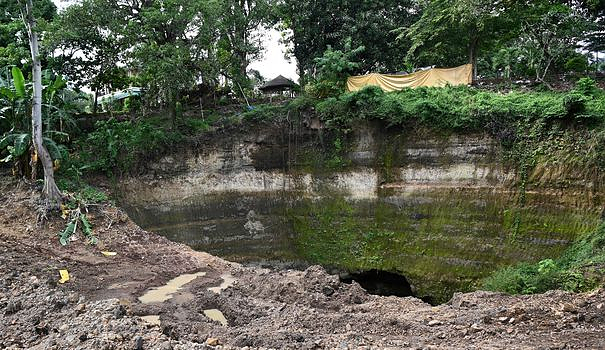 A huge grave discovered next to the official quarters of the head of the country's prisons, recently accused of ordering the murder of a journalist, is causing a stir.

About 60 meters deep, 40 meters wide, the sinkhole was discovered shortly after Gerald Bantag was suspended from the post of director general of the prison administration.

He is accused of ordering the assassination of prominent radio journalist Percival Mabasa, shot outside his home in October.

While he denies any involvement in the crime, Mr Bantag, who remains free while prosecutors decide whether there is enough evidence to charge him, admitted to the press that he ordered the excavation in the compound of the prison.

The reason? He is a scuba diver and would have liked to create the "deepest swimming pool in Manila".

Sweeping away speculation that the pit was designed to serve as an escape tunnel for inmates of the overcrowded New Bilibid prison, he says he had "intended to teach scuba diving".

Not far from the hole is an empty tiled pool of 25 meters.

For his part, the Minister of Justice, Jesus Crispin Remulla, reported that the ex-head of prisons said he was looking for the treasure of the Japanese general of the Second World War Tomoyuki Yamashita, scattered throughout Southeast Asia.

When AFP visited Mr. Bantag's former quarters on Wednesday, an armed security guard wearing a black T-shirt depicting a cannabis leaf was among the casually dressed team guarding the premises.

A domestic yellow python is still prowling the basement of the building, this officer warned.

This was "obviously not" part of the official prisoner rehabilitation program, he told AFP.

The place also housed fighting roosters, which are also banned on the prison grounds, but Mr del Rosario said they belonged to a prison officer, not Mr Bantag.

Despite the latest scandals to which the staff is "accustomed", "we are not all corrupt", insisted Mr. del Rosario.