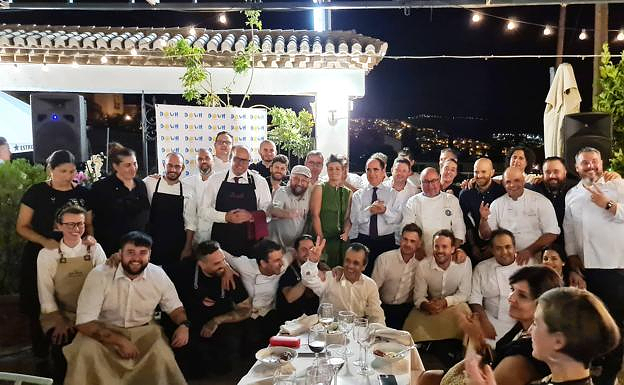 The III Charity Dinner for Future took place at Los Pinos Casa de Comidas de Huetor Vega on Monday, April 11. The dinner is charitable and committed. All of the proceeds go to a different social organization each year. Granadown, a provincial nonprofit organization, will receive the proceeds. It does important and admirable work.

It was a special and very emotional night. The event also served as a warm tribute to Rafael Jimenez who was one of the most talented pastry chefs in Granada. His life was tragically cut short last November. Rafael provided the dessert at the previous editions. He is a man of haute cuisine and solidarity. He knew he could count on him. He organized, convened, and mobilized the Granada gastronomic community for a variety of events that benefitted Granadadown.

Rafael Jimenez's family, Luisy Jimenez's daughters, and Luisy Jimenez himself attended the dinner. They read heartfelt words that touched the hearts of the audience.

Oscar and Lorena Arquelladas, brothers and owners of Los Pinos Casa de Comidas in Granada, brought together a large number of professionals from the hospitality industry in their restaurant. Francisco Rivas (previous Palace Hotel head chef, now retired) and Jose Miguel Magin (head chef at the Hotel Saray), prepared a special menu. All the dishes were named desserts but they were all prepared by Magin. In homage to Rafael Jimenez, a menu that is based on succulent trompe-l'oeil.

Curro Marin welcomed the diners as soon as they arrived. He immediately prepared Garajito de Grana, which was made with Garaje vermouth and tonic, and served it right away. Freshly cut Jamonzar ham and Niguelas village bread were already on the table.

El Pan de Luis and Panaderia Antigua were among the many collaborators who generously donated their products. .

Monday night was a memorable evening of haute cuisine, solidarity, and friends and colleagues meeting with Rafael Jimenez's memory more alive than ever.

‹ ›
Keywords:
NocheAltaGastronomíaSolidaridadPinosCasaComidasHuetorVega
Your comment has been forwarded to the administrator for approval.×
Warning! Will constitute a criminal offense, illegal, threatening, offensive, insulting and swearing, derogatory, defamatory, vulgar, pornographic, indecent, personality rights, damaging or similar nature in the nature of all kinds of financial content, legal, criminal and administrative responsibility for the content of the sender member / members are belong.
Related News