Hot, dynamic, explosive: That is our sun. 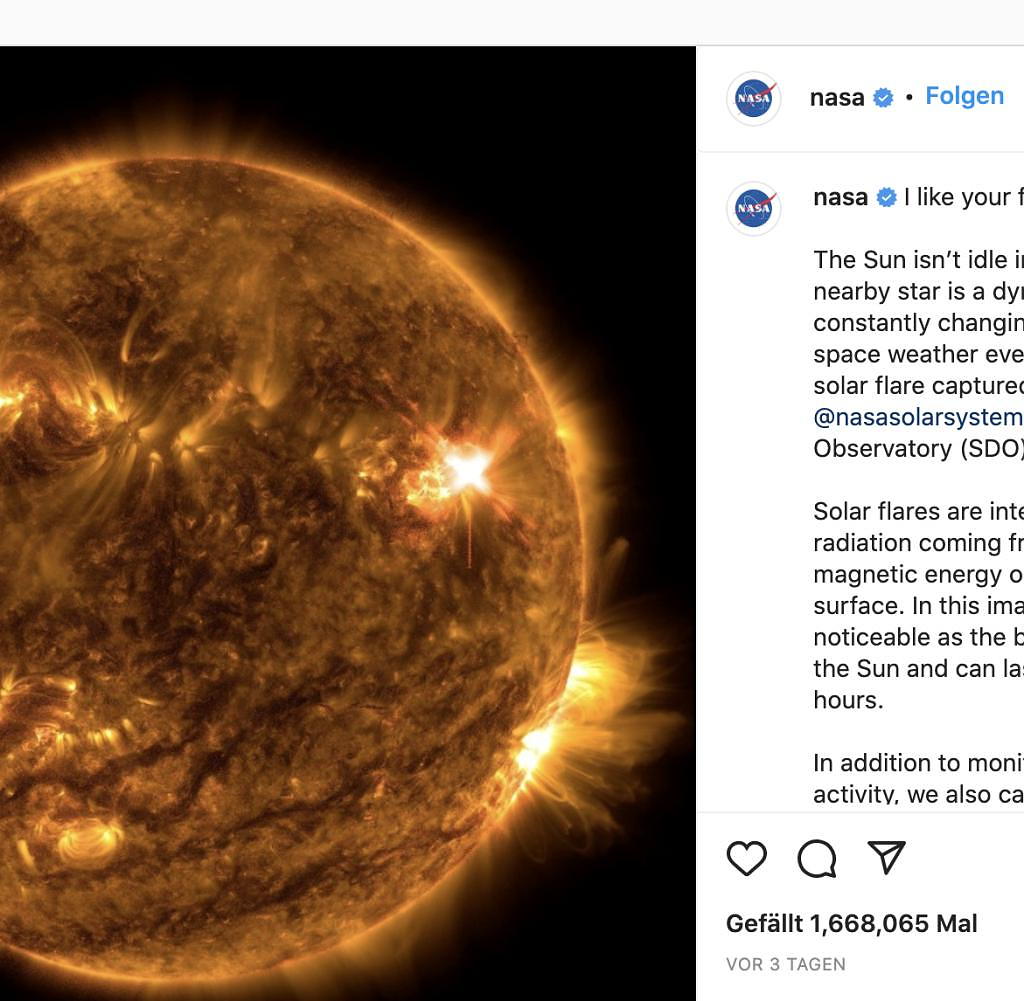 Hot, dynamic, explosive: That is our sun. The huge star is a bundle of gas, plasma and energy - which causes explosions on the sun's surface from time to time. This is illustrated by an image published by NASA on Instagram.

Around 10 p.m. CET on October 2nd, the US space agency was able to photograph a so-called solar flare. "The sun is not inactive," Nasa wrote on the social network. It is "a dynamic object that is constantly changing and causing weather events in space."

The spectacular image, showing the solar flare as a bright area in the upper left, was taken by NASA's Solar Dynamics Observatory (SDO) satellite. But as impressive as the explosion may look, it also has a negative impact on us on Earth.

Solar flares, also known as flares, are bursts on the sun's surface that release electromagnetic radiation. Such explosions can last from a few minutes to several hours and vary in strength, which is why they are classified differently.

According to NASA, the latest flare is classified as an X1 eruption. Scientists use the letter "X" to describe high-intensity explosions. This is followed by solar flares of categories M, C, B and at the lowest level A. The number after the letter can range from one to nine and indicates the extent of the flare even more precisely. One is weak and nine is strong.

Solar flares don't actually pose a direct threat to us humans. "Harmful radiation can't penetrate the Earth's atmosphere to reach people on the Earth's surface," according to the US space agency. However, if a flare is strong enough, it can significantly affect our GPS systems and radio networks - and with almost immediate effect. This is because electromagnetic radiation propagates at the speed of light.

The most recent X1 eruption shows the impact a flare can have on our telecommunications systems: According to the US National Oceanic and Atmospheric Administration (NOAA), the eruption triggered an R3 radio blackout in the country. The highest level is R5. The states of Florida, North Carolina and South Carolina were hardest hit, where rescue workers were deployed after Hurricane "Ian". Due to radio failures, some rescue operations and civil protection measures were delayed by several hours.

How often such solar flares occur and how strong they are can only be predicted to a limited extent. About every eleven years, the magnetic field of the celestial body tilts: the north and south poles of the sun swap places. This constant change influences solar activity - that is, how the extremely hot gas inside the star behaves.

Satellite data, for example, make it possible to detect sunspots. This means darker areas on the photosphere, i.e. the visible surface of the sun, where the gas is slightly cooler. Eruptions can also be recorded, but only with limited probability can be calculated in advance.

Do you want to continue your space journey? More galactic news can be found here:

‹ ›
Keywords:
SonneTelekommunikationHurrikaneElektromagnetische StrahlungElektromagnetische StrahlenKmpkt
Your comment has been forwarded to the administrator for approval.×
Warning! Will constitute a criminal offense, illegal, threatening, offensive, insulting and swearing, derogatory, defamatory, vulgar, pornographic, indecent, personality rights, damaging or similar nature in the nature of all kinds of financial content, legal, criminal and administrative responsibility for the content of the sender member / members are belong.
Related News