"It's a call for social violence", denounced on BFMTV and RMC the government spokesman Olivier Véran, before adding the adjective "in disguise" because, according to him, the former presidential candidate " can always say: that's not what I meant". 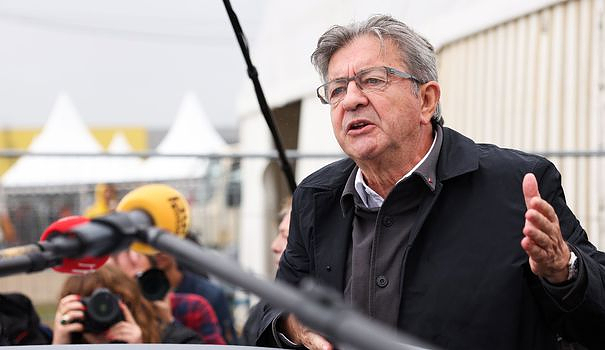 "It's a call for social violence", denounced on BFMTV and RMC the government spokesman Olivier Véran, before adding the adjective "in disguise" because, according to him, the former presidential candidate " can always say: that's not what I meant".

"It's not the first time that he goes beyond the limits, he is always in excess", he estimated, nevertheless welcoming a "dissociation" on the part of "more traditional parties within de la Nupes", in particular that of the boss of the PS Olivier Faure.

He was indeed the first to mark his distance from the rebellious leader on Thursday.

"On October 5 and 6, 1789, women marched on Versailles against the high cost of living. They brought the king, the queen and the dauphin by force to Paris under popular control. Do better on October 16," wrote Jean-Luc Mélenchon on Thursday. Twitter.

"There Jean-Luc you can do better. Provocation is not always the best way to be heard. There is no longer a king or queen. We will have neither spades nor pitchforks. Our mobilization will be non-violent and its strength is its message: justice against social disorder", quickly replied the PS deputy for Seine-et-Marne on the same social network.

Friday, it is the turn of another partner of the Nupes, the ecologists, to stand out, from Strasbourg where they are gathered for their parliamentary days.

"I think that the brutalization at this point of the political debate, in the end, it only serves Marine Le Pen, it does not serve to advance our proposals", estimated for his part the former Green candidate for the presidential election. , Yannick Jadot.

But it is especially on the side of the government and the majority that the fire is the most nourished. "These are factious remarks which are serious", accused on Sud Radio the Minister in charge of Relations with Parliament Franck Riester.

"I believe that he is not credible to continue to be a politician because he is not responsible and dignified in his remarks", estimated on Public Senate the boss of the Renaissance deputies Aurore Bergé, who does not " don't understand why they don't arrive within rebellious France to break definitively with these methods and with him".

Attacks which earned them a response Friday noon, still on Twitter, from Jean-Luc Mélenchon who persists and signs: "Véran and Bergé will they still go on July 14 to the military parade for the storming of the Bastille (100 dead)? The women's march in 1789 remains a model of women's social struggle (0 death, capture of the king and DDHC). On October 16, follow the good examples. March!"

His lieutenants also went to the front to counter-attack. "Olivier Véran and his government are responsible for the most terrible social violence for decades. To put an end to it, popular mobilization is a duty", reacted on Twitter Manuel Bompard, who succeeded Jean-Luc Mélenchon as deputy of the Bouches-du-Rhone.