They were among 176 bodies found by police as part of an investigation into the death of an inmate in early October. 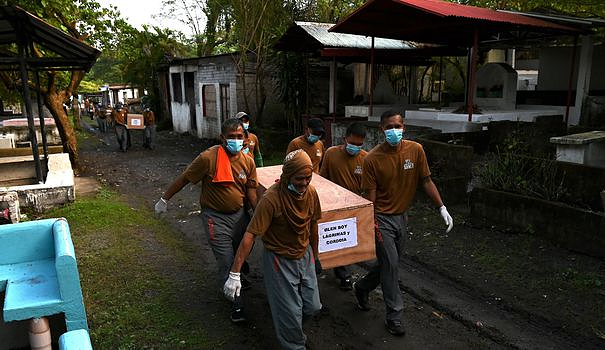 They were among 176 bodies found by police as part of an investigation into the death of an inmate in early October.

Most of the deaths are due to "natural causes", said Cecilia Villanueva, acting director of the prison administration's health services.

Ms Villanueva said 127 of the 140 bodies buried so far were in an advanced state of decomposition and could not be autopsied again.

Bodies began piling up in the funeral home in December 2021 after their mostly poor families failed to claim them.

Prison staff were unable to ensure that the deceased were buried in time due to "constraints", the official added.

The remains are normally kept at the dedicated funeral home for three months to give relatives time to collect them.

Friday's mass burial was the largest ever organized by the prison administration, she told reporters.

Seventy plywood coffins were carried by inmates to their final resting place, cheap concrete graves in a cemetery at the prison complex.

Ms Villanueva said an average of one to two prisoners died each day inside New Bilibid prison, where around 29,000 inmates are locked up in a facility designed to hold 6,435. There are currently only five doctors to treat them.

The macabre discovery at the funeral home is just the latest scandal to rock the administration that runs an overcrowded prison system.

Its last leader, Gerald Bantag, is accused of ordering the assassination of prominent radio journalist Percival Mabasa, as well as Cristito Villamor Palana, one of the detainees who allegedly conveyed the execution order to the gunman.

After Mr Bantag was suspended from his post as Chief Prisons Officer, a huge grave was discovered next to his former official quarters in the prison complex.

Sweeping away speculation that the pit was designed to serve as an escape tunnel for inmates, he says he "intended to teach scuba diving".