A historical figure in ecology, "Lulu" is known for having founded, in 2003, the first group in France allowing citizens to buy back threatened forests and manage them in a sustainable way. 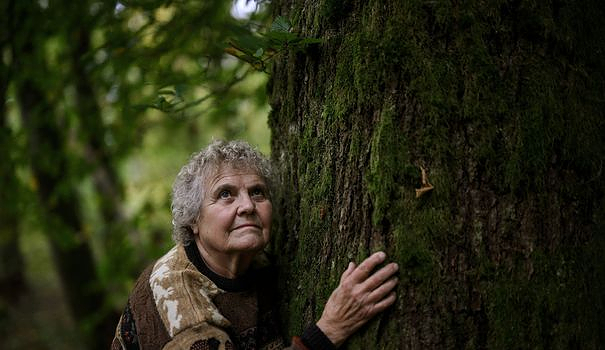 A historical figure in ecology, "Lulu" is known for having founded, in 2003, the first group in France allowing citizens to buy back threatened forests and manage them in a sustainable way. Bringing together 1,100 partners, owners of 370 ha, the group has spread widely in France. "We can be proud of it," says Lulu.

Today, with the weight of the years, his appearance has become frail. And a staphylococcus which almost won in 2019 now forces him to rely on canes.

But this little woman with intense and determined blue eyes has lost none of the revolt that took hold of her one day on a hike in the 1970s: "I saw that they were cutting the hardwoods and planted softwoods instead. It shocked me! Since then, I have never lost my temper".

Oaks, beeches and other majestic chestnut trees were destroyed to plant "more profitable" spruces. Above all, they were leveling the forest which had saved Lucienne in her childhood.

A worker father, an orphan mother and five brothers and sisters: "we were a large poor family but I had a wonderful childhood because I had the forest of Montmain", which adjoins the small village of Couhard (Saône-et -Loire) where "Lulu" was born on June 5, 1941.

His playground was the trees and the Brisecou waterfall, where the crayfish had not yet disappeared. In "the misty mornings, when the birds woke up", the little girl went to cut wood with her father.

But at the age of 12, paradise flew away: "We had to move to a low-rent housing in town, in Autun. And at school, I found myself with bourgeois children who said: if they didn't have so much children, they would be less poor".

This "difficult adolescence" will forge her character as a fighter. As an adult, she leaves the Morvan to follow her husband to the Paris region but "does not give up". For ten years, she took evening classes and obtained an accounting certificate.

"It's proof that we can get by if we work hard. It's like ecology: a fight".

Because nothing brings her down, Lulu: the death of her husband from a degenerative disease, 8 years ago; the misogyny when she becomes her company's first chief accountant; the contempt of the operators who see in it an "ecological-little-birds".

“We were laughed at,” she says, recalling her first participation in forestry commissions.

- Mother Courage of the Forest -

After her return to the Morvan in 1979, Lulu became the itchy bitch of the loggers, "nagging" elected officials and officials, as she puts it, like Mother Courage of the forest.

“We ratiboise to plant Douglas pine which sells for three times more expensive and grows three times faster”, but which is very poor in biodiversity, summarizes Lulu.

Once marginal, softwoods already represent 47% of the 155,000 hectares of forest in the Morvan. "In 30 years, it will be a wood factory," she says.

On the old sofa in his office covered with cobwebs - "they are welcome here" - the yellowed files and the black and white press clippings testify to a life dedicated to activism: "I see everything what we did, but we are still at the same point".

"However, we know that we can do otherwise," says Lulu. As proof of this, she sees the sustainable management exercised within the "Forest group for the safeguard of hardwoods in the Morvan", which she founded to buy back forests in danger.

"We prove that it's not a sore thing. We don't put the forest under glass: we too cut down trees, but in a sustainable way," she says.

As she got older, Lulu has lost none of her capacity for indignation. "But I have less energy," she admits to explain why she left the co-management of the Forestry Group and the presidency of the Autun Morvan Ecology association.