In Spain, the "hunger queues" swollen by inflation

"We see the prices go up every week, even on basic products. 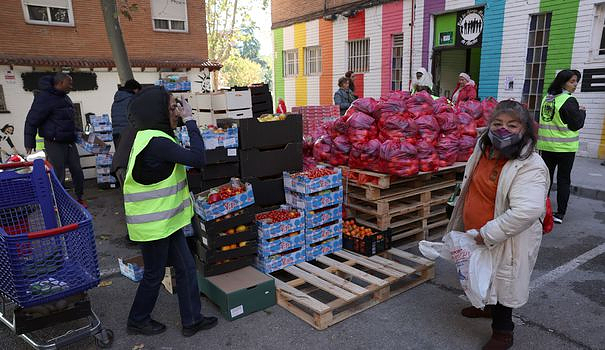 "We see the prices go up every week, even on basic products... We can't do it anymore", blows this 44-year-old father of a family in front of pallets of fruit and vegetables placed at the foot of a large building in brick from the south of Madrid.

Every Saturday, this builder from Venezuela comes to collect food from an association created in the popular district of Aluche during the pandemic to help residents in difficulty.

“I earn 1,200 euros per month and my wife 600 euros” for a part-time home help position. "But we have three children" and "once paid the 800 euros of rent and the 300 euros of various charges, we don't have much left", details Hugo Ramirez.

Like him, there are thousands of them queuing every weekend at several points in the Spanish capital to get food. A phenomenon known as "hunger queues", fueled in recent months by soaring inflation.

"Every week, we see new families arriving in need, especially since the war in Ukraine", which has aggravated the rise in prices, explains to AFP Raul Calzado, volunteer of the Mutual Aid Network of Aluche (Rama ).

The association, which distributes seven tonnes of food a week, in particular thanks to the support of the Food Bank, is now helping 350 households. But at the rate things are going, "we will have 400 by the end of the year," predicts Mr. Calzado.

Behind him, a dozen volunteers are busy in a room filled with crates of pasta, canned food and baby diapers. Outside, others take care of the families lined up along the building, including many immigrants.

"Some beneficiaries have no income. But we also have more and more retirees with small pensions or people who work but whose salary is insufficient" in the face of "galloping inflation", specifies Elena Bermejo, vice- president of the association.

According to the National Institute of Statistics, food prices rose by 15.4% year on year in October, the worst figure for nearly 30 years. That of sugar even jumped by 42.8% and that of vegetables by 25.7%.

Faced with this dynamic, the Spanish left-wing government has multiplied measures in recent months to support purchasing power. But they are considered insufficient by the associations.

"For some families, even buying a liter of olive oil or a kilo of lentils has become difficult," insists Elena Bermejo.

For associations, the situation is also complicated. "With inflation, we are seeing a drop in donations", people having "less money", underlines Luis Miguel Rupérez, spokesperson for the Spanish Federation of Food Banks.

A source of concern for the organization, which helps more than 186,000 people in the Madrid region and 1.35 million in total in Spain - almost the equivalent of a city like Barcelona.

"The problem is that with rising prices, we can buy less food," says Rupérez. Since January, the Federation has collected 125,000 tons of food against 131,000 tons over the same period last year.

According to a study published at the beginning of the year by the University of Barcelona, ​​one in seven Spanish households is faced with “food insecurity”, due to a lack of access to healthy and nutritious products. A situation that few see improving in the short term in a country facing chronic insecurity.

Impoverishment "tends to worsen", assures Raul Calzado, who says he sees mothers "stopping to buy feminine hygiene products in order to be able to feed their children".

"I hope it will get better" but "I'm afraid it's not the case", agrees, his bag of food in hand, Hugo Ramirez. By drawing a relative parallel with his native Venezuela, which has been plagued by unbridled inflation for ten years: "everything is expensive, expensive, expensive..."