In seven Almanzora towns, minor offenders will be served by the community

Jose Luis Delgado, the regional delegate for Regeneration, Justice and Local Administration of the Board of Almeria, has entered into agreements with seven municipalities of the Almanzora Valley to ensure that minor offenders from Tijola, Lijar, Arboleas, Seron, Macael, Urracal and Sufli are able to carry out and adhere with the open environment measures imposed in the localities by the judges, such work for the community's benefit. 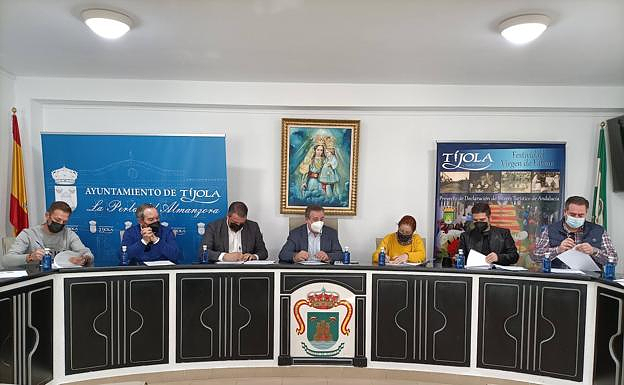 Jose Luis Delgado, the regional delegate for Regeneration, Justice and Local Administration of the Board of Almeria, has entered into agreements with seven municipalities of the Almanzora Valley to ensure that minor offenders from Tijola, Lijar, Arboleas, Seron, Macael, Urracal and Sufli are able to carry out and adhere with the open environment measures imposed in the localities by the judges, such work for the community's benefit.

Delgado was transferred from the Delegation and has appreciated the cooperation between the Judiciary and the Autonomous Administration, as well as the participation of participating municipalities "for benefit of the minor", which he thanked for their participation in signing these agreements with Juan Marin's Ministry.

When a Justice Service determines that the minor meets the criteria and has received the appropriate judicial authorization, the Justice Service will allow execution of open judicial actions. This does not mean internment. These agreements include monitoring the education of the minor and the results.

The provincial head of Justice highlighted this work to promote "retributive Justice" by highlighting the municipalities that "collaboratively" worked with these municipalities. "The minor first acknowledges the error and then faces the consequences."

Delgado summarizes it thus: "It is about taking responsibility for the offender that's achieved with this type measure", after the town councils have sent a list of tasks that the young person can complete in accordance to the action agreement.

Delgado explains that the execution of the measures are monitored and an evaluation is done of the work performed under the direction of the Juvenile Court. As the Juvenile Justice competent administration, Delgado has stated that the Ministry and its delegates are able to make this type of agreement with private and public non-profit entities in order to develop and fulfill these measures.

These tasks are not intended to create an employment relationship with Consistory. They also do not come with a salary. All tasks must be adjusted to the needs of minors and related to activities undertaken by the City Council.

Jose Juan Martinez, Tijola's mayor, said that he valued the collaboration between local administrations with the Ministry of Justice to facilitate reintegration and to provide an outlet for young people with pending issues with the justice, so they can work for the community.

"The most important thing is that the young men look useful and that they make a service for the community," said the first Tijoleno Mayor. The process involves minor offenders admitting that they have a fault, and that their behavior is unacceptable. "We must repair the damage it has done with the support and guidance of administrations.

‹ ›
Keywords:
MenoresInfractoresHaranServiciosComunidadSietePueblosAlmanzora
Your comment has been forwarded to the administrator for approval.×
Warning! Will constitute a criminal offense, illegal, threatening, offensive, insulting and swearing, derogatory, defamatory, vulgar, pornographic, indecent, personality rights, damaging or similar nature in the nature of all kinds of financial content, legal, criminal and administrative responsibility for the content of the sender member / members are belong.
Related News