In kyiv, the "resourcefulness" of inhabitants deprived of water and electricity

Wrapped up in a brown parka, Tamara has just arrived with her husband to join the queue. 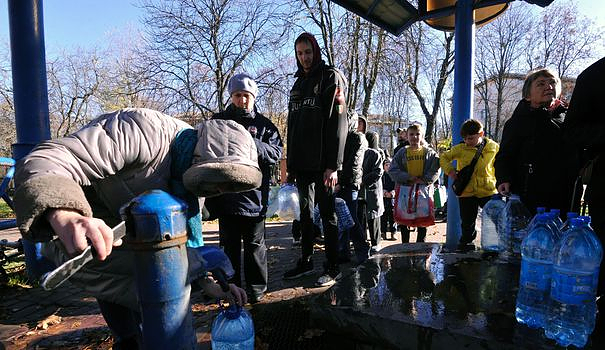 Wrapped up in a brown parka, Tamara has just arrived with her husband to join the queue.

"This morning there were big explosions. I don't know if there was a strike or not, but there was no electricity in our house from 6 am. Then , the water began to become scarce. And now there is none at all", explains the 33-year-old young woman, who does not wish to give her name.

“We are queuing up to collect drinking water,” adds the mother of two children aged 9 and 11.

In the morning, Russia launched a new massive attack on infrastructure in several regions of Ukraine, depriving up to 80% of the inhabitants of the capital, kyiv, of water and leaving "hundreds of localities" without electricity.

Previous strikes on the capital's energy system on October 10 and 17 had led the private Ukrainian operator DTEK to impose 4-hour power cuts every day in parts of the city.

Tamara confirms that she's had "(power) outages for two weeks now. We're getting by," she says.

"We will overcome all this and we will find the light. You know, sometimes children even like to sit with candles, they know that all this is temporary, the main thing is to believe in it", launches the young woman.

In the queue, Vitali, a 25-year-old engineer, also wants to put water or electricity cuts into perspective: "It's not very pleasant but I think everything will be fine, it's nothing serious".

At the fountain in the park, the two taps flow without interruption. Everyone quietly filled several bottles or carboys of water. Some even came with seals. The older ones brought wheeled carts to carry the containers more easily.

Twenty kilometers away, north of kyiv, it is an energy site that was hit by several missiles early in the morning.

Posted on a crossroads, about fifteen soldiers and police prohibited access to the road leading to the site.

Mila Riabova, a resident of the neighboring town, her husband and their 9-year-old daughter, were “woken up by powerful explosions”.

"I didn't hear a siren (alert), I just received an air raid alarm message on my phone," explains the 39-year-old translator.

"We were about to take our daughter to school. But we did not take her because there is no more light there", as in their apartment, she says.

Is she afraid of these bombardments? "I'm not afraid of anything," she replies. "There are still people in the (bomb) shelters, but not us."

However, as winter approaches, the prospect of having to live without electricity or heating worries her.

"It can be difficult to manage, especially with a toddler," she says, adding that she might consider moving abroad.